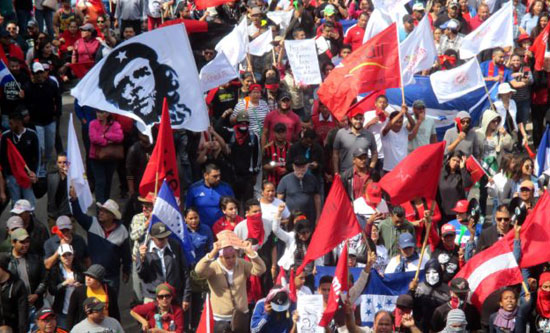 After weeks of protests, a general strike against the result of the manipulated elections of 26 November began on 21 January. Called by the Opposition Alliance Against The Dictatorship, organised by ex-president Zelaya, it continued for a week until 27 January when it blockaded roads around the capital’s national stadium where Hernández was reinstalled as President for an unprecedented second term. Tear gas drifted across flaming barricades in clashes between police and angry protesters. The opposition boycotted Hernandez's inauguration, and held a symbolic swearing-in for its presidential candidate Salvador Nasralla on the same day.

So far 33 people have been killed during the continued protests since the elections. ‘This was armed robbery,’ Nasralla said of Hernández’s election ‘victory’. The UN and IACHR experts reported that even before Christmas more than 1,500 people had been detained abused and maltreated. The new parliament began its first session on 25 January with the opposition protesting vociferously inside the chamber at the swearing in of new ministers.

In May 2015, the Supreme Court, stacked with President Hernandez’s allies, declared the constitution ‘unconstitutional’ and allowed him to become the first Honduran president ever to run for a second term. This reflects the Court’s continued political support for the right-wing establishment. In 2009 the court had ordered the army to expel the democratically elected President Zelaya from the country for simply discussing such a change. That action was declared a military coup by the UN, EU and OAS (as admitted by the then US ambassador[1]).[2] However, delighted with the removal of a new ALBA ally, US imperialism provided some $200m in military and police aid to Honduras from 2009 to mid-2016, despite the Honduran government’s extensive human rights violations, and involvement in massive social security corruption by Hernandez in 2014.

Following Zelaya’s removal in 2009, poverty increased by 13.2% and extreme poverty by 26.3% in just three years.  Unemployment grew between 2008 and 2012 from 6.8% to 14.1%.  Hernández then won the 2013 election against Xiomara Castro and Salvador Nasralla in an election complete with accusations of vote buying, fraud, intimidation, and other irregularities. Honduras ranks 130th in the Human Development Index, a basic health service is available only for a third of the population and 60% of its population lives in poverty (World Bank).

This time, polling stations – for Presidential, Congressional, Municipal and Central American Parliamentary seats – closed an hour early, blocking voters. After the vote the Electoral Tribunal (TSE) planned to release constituency totals as they came out, but suspended this process for nearly seven hours. The next day, the TSE released its preliminary results: with 57% of the votes counted, the opposition candidate and TV star Salvador Nasralla (candidate for Opposition Alliance Against The Dictatorship, which united three parties, Libre, Pac and Pinu-SD), held 45.17% to incumbent President Juan Orlando Hernandez’s (National Party) 40.21%.

The next day The Economist newspaper ran a story saying that it ‘… has obtained a recording that, if authentic, suggests the ruling National Party planned to distort the results of yesterday’s elections. It appears to be of a session to introduce party members to a scheme for fraudulently boosting the party’s vote. With early results actually pointing to a good result for the opposition, the situation is set to get messy....’ The same day the electoral court’s computer systems then allegedly failed, only to come back up a day later, showing President Juan Orlando Hernández (National Party) ahead by a narrow margin. Before any official results had been announced Hernández then declared himself winner; Nasralla countered by also claiming victory. On Wednesday 29 November counting was again halted. The TSE announced that final results might not be available until Thursday, 30 November, by which, with approximately 94% of the votes counted, Hernández’s lead had climbed to 42.92% compared to 41.42% for Nasralla.

Nasralla accused Hernandez of manipulating the results. When Hernandez’s ‘victory’ was announced on the 30 November, protests across the country were such that the Electoral Commission was forced to announce a partial recount conducted using a special procedure that puts the process under the scrutiny of both political parties, international observers and the media.  An OAS report concludes that there was a sudden swing in the vote totals after 68% of the votes had been counted and that the ‘differences are too large to be generated by chance … raising doubts as to the veracity of the overall result’.[3]

On 1 December, the TSE announced that they would give no further results until it had reviewed all of the improperly completed 1,031 tally sheets. Widespread protests against the delays and apparent fraud were so widespread that the government imposed a 10-day, 6pm-6am state of emergency curfew. The Army and National Police were ordered to clear demonstrators or people committing ‘illegal activities’ from public areas, highways, bridges and private or public buildings.

By now Nasralla had told CNN he would only accept the results if 5,000 precincts were reviewed. On 2 December, the Honduran National Roundtable for Human Rights declared the government actions as state terrorism and viewed the state of exception as unconstitutional and a cover for electoral fraud. On 3 December thousands of Nasralla’s supporters took to the street in Tegucigalpa in a largely peaceful demonstration, but across the country, by 4 December, at least 11 people had been shot by police and 15 others were injured during these post-election protests.

The next day several hundred police of different ranks and Cobras agents (riot police) declared a sit-down strike, refusing to go to the streets to repress protesters. The government falsely claimed it was a pay strike, but the authorities were forced to declare that investigations had started to establish who was responsible for the deaths. The TSE recounted about 6% of the votes again on 4 December and agreed next day to look at ballots from 5,173 polling stations – nearly a third of the total.

The curfew was partly lifted on 7 December following OAS demands.  By 15 December 2017, the court had finished recounting the suspect ballots but had not declared a winner. The court had 30 days from the contest to do so. Protests continued throughout the country, now with 16 deaths and 1,675 arrests.

On 17 December, Hernández was awarded the victory with 42.95% of the vote to Nasralla's 41.42%. There is no second round in Honduras’ first-past-the-post voting system. The announcement sparked a new wave of protests across the country, with ex-president Zelaya, who returned from exile in 2011 and now a Honduran deputy to the Central American Parliament, announcing a national strike for the 21 January. The country’s two major cities – Tegucigalpa and San Pedro Sula – saw their main exits blocked and traffic between them severely reduced. The OAS rejected the official tally, calling for new elections, but the reactionary governments of Mexico, Spain, Colombia, Guatemala, Taiwan, South Korea and Israel have congratulated the conservative president. The US did so on 22 December, squashing any further protests by the OAS.  Its endorsement came as a reward, one day after Honduras joined nine countries voting against a UN resolution, passed by 128 to 9 with 35 abstentions, condemning plans to move the US Embassy in Israel to Jerusalem.

On Friday 12 January protesters in Tegucigalpa against the result were again attacked and Manuel Zelaya was pushed around by military police. Zelaya, Salvador Nasralla and many protesters also suffered the effects of tear gas. On 19 January the TSE provided Hernandez with formal recognition as next president.

The US has a military base in Honduras. Honduras served as a staging post for US-backed terrorists (the ‘Contra’s’) aimed at Nicaragua’s socialist government from 1979 to the early 1990s. Since 2009 Hernandez has been seen as a reliable partner in the ‘Northern Triangle’. This includes Guatemala and El Salvador, where the US-funded ‘Alliance for Prosperity’ package aims to control the flow of workers and drugs into the US, in order to manage its reserve army of labour and drug the dispossessed.