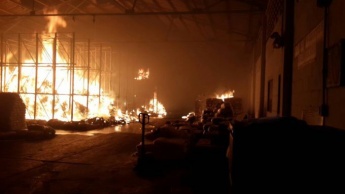 Venezuelan authorities said Thursday more than 50 tons of food have been incinerated by anti-government groups, amid ongoing attacks on public infrastructure.

The attack took place in the municipality Simon Bolivar in Barcelona, Anzoategui state, when a group of attackers infiltrated a government food distribution centre. The Ministry of Food has stated the attackers set fire to the interior of a warehouse, destroying a stockpile of basic food products awaiting distribution.

“This is … fascism, this attack on the people by these terrorists,” he said.

State authorities say the attackers used improvised incendiary devices, including Molotov cocktails, though no injuries have been reported. Authorities also said they’ve recovered around 50 tons of food from the warehouse, which will be distributed to communities across Anzoategui on Friday.

No arrests have been made in connection to the incident, and no group has claimed responsibility for the attack. The interior of the warehouse was defaced with graffiti, including “Viva Leopoldo,” a possible reference to imprisoned opposition leader Leopoldo Lopez. Another spray painted message read “damned Chavistas,” while a third stated “no more hunger”.

The incident was just the latest in a wave of attacks targeting Venezuela’s state food distribution network. More than 30 facilities and vehicles involved in food distribution have been attacked in recent months, according to the minister.

“Also, two food aid workers have been injured by gunfire in Lara state,” he added.

The attacks have coincided with widespread opposition protests over the past three months, during which more than 90 people have died. In another alleged case of opposition violence, three power substations in Aragua state was also reportedly attacked Thursday.

“A group of terrorists attacked with Molotov cocktails and and set fire to these three units that serve the people,” Energy Minister Luis Motta Dominguez told state media.

The minister condemned the attack, and said it resulted in power outages in some parts of the state.

“They are not attacking an installation or the government as such; they are attacking the people, because ... it’ll take 24 hours to restore electricity with those units,” he said.

The minister continued by alleging the incident was part of a broader campaign of violence.

“This systematic attack was carried out with the purpose of instilling terror,” he said.

Meanwhile in Caracas, officials held a tour of the Supreme Court, which came under attack by a rogue police officer piloting a stolen helicopter earlier in the week.

Speaking to visiting diplomats and reporters, the court’s security head Jean Carlos Stanfor said the attacker dropped four grenades on the building, though only two detonated inside. He said the explosions occurred near an education centre for the children of court staffers, though he suspected the explosives were aimed at a Nation Guard (GNB) post.

“The grenades exploded 15 meters from the GNB post,” he said.

Over the last 24 hours the GNB itself has come under increased scrutiny, after controversial Attorney General Luisa Ortega issued charges against the guard’s former national head, Antonio Benavides Torres. She accused Torres with overseeing human rights abuses against opposition protesters. More than 90 people have died amid the protests, with at least 13 deaths possibly being linked to the actions of security forces. On the other hand, around 24 deaths have been linked to the actions of violent opposition groups.

According to a statement from the attorney general's office, it has "so far carried out 450 investigations into alleged violations of fundamental rights."Of these cases, 23 people died and 853 injured were attributed to police or military officials," the statement read.

“In many of these incidents, there is evidence of excessive use of force in repressing protests,” Ortega alleged.

Torres was removed from his position as head of the National Guard last week.

Ortega's latest move came a day after Venezula's highest court froze her assets and banned her from leaving the country ahead of a July 4 hearing on allegations of "grave misconduct". While Ortega has accused Torres of being too harsh on protesters, she has been hit with allegations of being too soft on violent offenders.

More than 2000 people have been detained or indicted in relation to the protests and political violence, though only around 300 have faced jail time. Ortega has also been accused of illegally appointing her vice attorney general.