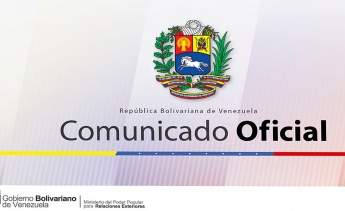 An official communique from the Venezuelan government on the helicopter attack perpetrated against the Supreme Court and Justice Ministry Tuesday evening.

The government of the Bolivarian Republic of Venezuela hereby notifies the general public and sister countries of the world of the armed attacks carried out in the evening of Tuesday, June 27th 2017, against the headquarters of the Ministry of Justice and the Supreme Court Justice, as part of the escalation of a coup against the  Constitution of the Bolivarian Republic of Venezuela and its state institutions.

Both attacks were carried out from an Airbus Volcom helicopter, model 105, initials CICPC02, stolen from the General Francisco Miranda airbase in La Carlota, Caracas, by a subject named Oscar Alberto Perez, who took advantage of his credentials as an inspector subscribed to the aerial transport division of the CICPC [special investigative police body].

The perpetrator flew the aircraft within the vicinity of the Justice Ministry on Urdaneta Avenue, firing around 15 shots against the building while a reception was being held on the rooftop terrace for a group of journalists celebrating the National Day of Journalists. At the moment of the attack, 80 people were present.

Afterwards, the helicopter was flown to the headquarters of the Supreme Court of Justice, where the Constitutional Tribunal was in session, including all of its judges and a group of workers in their offices. There were shots fired against these people and at least four grenades thrown, [which were] made in Israel and of Colombian origin. Of these [grenades], one did not go off and another was collected. Two of these grenades were launched at agents of the Bolivarian National Guard who were guarding the building.

Thanks to the rapid response of the National Guard soldiers, a tragedy was averted. The perpetrator of these acts is being investigated for his links to the Central Intelligence Agency [CIA] of the United States and the embassy of that country in Caracas, as well as for his links to a former justice minister who recently publicly confirmed his contacts in the CIA.

For the Bolivarian government, these are terrorist attacks framed within the insurrectional offensive advanced by radical sectors of the Venezuelan right-wing, with support from foreign governments and powers.

The Bolivarian National Armed Forces and state security forces have been deployed, with the objective of capturing the perpetrator of these acts and to recover the aircraft. We call on all of those who can contribute information to help locate their whereabouts to communicate with authorities through telephone number 911.

The Bolivarian government calls on the political parties grouped together under the so-called Roundtable of Democratic Unity, as well as the Catholic Church hierarchy and other factors of Venezuelan society, to condemn these acts and to disavow the use of violence once and for all.

The Bolivarian government calls on the Venezuelan people to be alert in the face of the escalation of a coup, which is an attempt to alter the constitutional order in Venezuela and has shown to be unscrupulous in its political and economic ambitions.

None of these attacks will stop the activation of the constituent popular process, nor will they impede the Venezuelan people’s right to vote on July 30th to choose the members of the National Constituent Assembly.

The legitimate president of the Bolivarian Republic of Venezuela, Nicolas Maduro Moros, who today headed the presentation of National Prizes for Journalism, is at the head of his governmental team taking actions to safeguard the security and tranquility of the Venezuelan people.

Now more than ever, the words of Commander [Hugo] Chavez prevail: Unity, struggle, battle and victory.

Ministry of Popular Power for Communication and Information