Published on 11 December 2017 by venezuelanalysis

Venezuela’s socialists have won a landslide victory in municipal elections Sunday, taking 21 out of 23 state capitals as well as the Caracas Capital District. 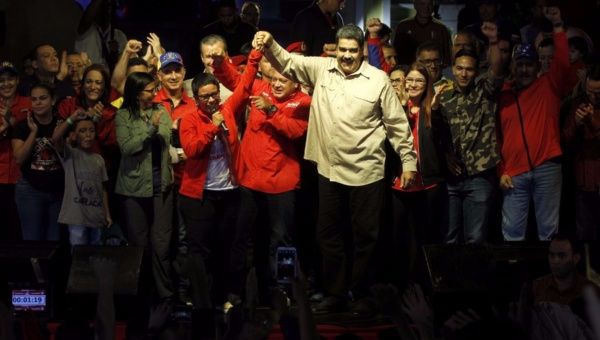 President Nicolas Maduro’s United Venezuelan Socialist Party (PSUV), along with its allies, have secured victory in 308 of Venezuela’s 335 municipalities. According to preliminary results, the governing socialist party managed to take 21 out of the country’s 23 state capitals as well as the Caracas Capital District.

Meanwhile, the only state capitals to remain in opposition hands are Tachira’s San Cristobal and the Libertador municipality of Merida, which were won by the Movement Towards Socialism and Christian Democrat (COPEI) parties, respectively.

With large opposition parties boycotting, grassroots movements to the left of the PSUV leadership decided to launch candidacies in several municipalities in a bid for greater diversity within the revolutionary process.

In Apure, Jose Maria "Chema" Romero from the Bolivar and Zamora Revolutionary Current won the Paez municipality in alliance with the ruling socialists. Thirty-eight-year-old Romero has pledged to institutionalize the power of communes and social movements in the municipality as well as promote a local productive economy.

Elsewhere, however, local movements launched their own challenges to PSUV candidates, sometimes viewed as an imposition by the party machine.

In one such case, local commune leader Augusto Espinoza defeated his PSUV rival to become the mayor of Sucre state’s Cajigal municipality.

In Lara state, commune leader and Simon Planas candidate Angel Prado accused electoral authorities of refusing to recognise his victory. Despite his PPT party ticket securing over 57 percent of the Simon Planas vote, Prado said the CNE refused to acknowledge his candidacy and instead handed his votes to the PSUV. The CNE had previously blocked Prado's candidacy on the grounds that as a delegate to the National Constituent Assembly (ANC) he did not have the permission of the body to run.

Prado's El Maizal commune took to the streets Monday and has vowed to remain there until their candidate's victory is recognized.

"The people of Simon Planas organized a rally-march in Sanare demanding that the votes that gave Angel Prado his victory be reocgnized," the tweet reads.

"In Simon Planas there is a desire for popular sovereignty being expressed that must be heard,” he said.

Prado has also been endorsed by former Electricity Minister Jesse Chacon and ex-Communes Minister Reinaldo Iturriza, who both called Monday for the outcome of the vote to be respected.

In another high profile race in the Capital District’s Libertador municipality, Eduardo Saman conceded defeat to his PSUV rival Erika Farias. Having previously served as commerce minister and consumer protection czar, Saman had been a favoured candidate among critical Chavistas, though he accused the government – including electoral authorities – of “blackballing” him.

Saman has slammed the National Electoral Council (CNE) for failing to put his name on the ballot, meaning that his supporters had to cast their votes for electoral tickets bearing the names of other candidates, who were withdrawn by their parties in order to back him. According to the ex-minister, the CNE had to publish in all voting centers a "statement of error" alerting voters that they can still vote for him despite his name not appearing on the ballot.

"[The CNE] did not release the statement of error, nor did it even publish it, which is a serious vice in the process," Saman told VA on election day.

Saman has also denounced a "blockade" by state and private media outlets, who he said had refused to cover his campaign.

After the preliminary results came in, Saman tweeted, “The struggle doesn't end here, it's barely beginning.”

Libertador municipality in southern Monagas state was likewise the scene of controversy Monday where supporters of Communist Party (PCV) candidate Regulo Reyna took to the streets to protest an error by the CNE.

Though Reyna beat PSUV incumbent Jose Figuera with over 62 percent of the vote, the CNE handed the election to Miguel Presilla, who was the PCV candidate before he was withdrawn in favor of Reyna. Local CNE head Irainidy Gonzalez has refused to sign off on the result, which she called an "inconsistency", opting to wait for state and national electoral authorities to resolve the issue.

Speaking Sunday evening, Maduro declared the preliminary results a victory, and called for “the unity of all Venezuelans”.

He also welcomed the outcome of a gubernatorial re-run election in Zulia, where the PSUV’s Omar Prieto won with 57 percent of the vote.

“Today we can officially say that we have won 19 governorates, including Zulia, which is the most populous state in the country,” Maduro said.

According to the preliminary results of the municipal vote, turnout was at 47.32 percent.

"These elections saw the participation of 9,139,564 voters," said Sandra Oblitas, vice-president of the National Electoral Council (CNE). The figure is more than a million voters lower than the last municipal vote in 2013, when over 10,665 Venezuelans went to the polls.

Nonetheless, Maduro described the level of participation as “extraordinary”.

“I want to thank the people of Venezuela who have come to the voting centres to exercise their right to vote,” he said.

“Credible elections are characterised by inclusion, transparency and equality,” the MUD said in a statement on Sunday.

“None of those attributes were present today in Venezuela,” they said.

Opposition figures have also disputed the level of turnout.

"Nobody believes in that 47 percent,” said Luis Florido, the head of the opposition-controlled National Assembly’s Foreign Policy Commission.

Notwithstanding the fraud allegations, an international observer mission led by the Council of Latin American Electoral Experts (CEELA) ratified the CNE’s results as credible.

“We believe totally and absolutely in the results offered by the National Electoral Council because all the guarantees offered throughout the process were given,” said CEELA President Nicanor Moscoso.

“It's a very good [turnout] and it is within the average that exist in the region,” he added.

Aside from several high-profile cases including Libertador and Simon Planas, no widespread voting irregularities have been reported. Authorities in Tachira said three people had been detained after at least two separate incidents at voting centres. A military spokesperson said at least one of the detainees allegedly destroyed their ballot, while in another incident a voting machine may have been damaged.

While the day may have gone smoothly for voters, prominent Venezuelan opposition-aligned pollster Luis Vicente Leon said the results could be a heavy blow to the MUD’s hopes for presidential elections slated for next year.

“This is the worst result for the opposition in any election during the Chavista era,” he told Reuters.

“They don't delegitimize the [electoral] process and they’ve abandoned municipalities, which are fundamental for the support base of the opposition.”

Meanwhile, Maduro welcomed Sunday’s vote as a positive sign for his party’s ambitions to retain control of the presidency in 2018.

“We’re ready to compete!” he told supporters during a late night rally in Caracas.

Just weeks ago, the PSUV announced Maduro would run for re-election in 2018 and campaign posters bearing the president's image already dot the streets of Caracas.

In another surprise move  Sunday night, Maduro said he would support a proposal to suspend parties from running if they boycotted previous elections.

During the speech, he singled out some of the major parties that boycotted Sunday’s vote.

“Popular Will, Justice First, have disappeared from the Venezuelan political map,” he said.

In the past, Maduro allies have accused these parties of endorsing elections when they win, while crying foul when the polls go against them.

“A party that has not participated today and has called for the boycott of the elections can’t participate anymore,” he said.

Maduro continued, “That is the criterion that the National Constituent Assembly [ANC] has put forward, and I … support them,” he said.

Maduro appeared to be referring to a little-known proposal before the ANC to prohibit election boycotters from participating in subsequent elections. The controversial proposal has not been approved by the ANC, and it's unclear whether Maduro could unilaterally pass such a measure.

In response to international media reports claiming that the ban was already in place, US State Department spokesperson Heather Nauert published a tweet lambasting Venezuela as an "authoritarian dictatorship".

"The ridiculous statements by the State Department spokesperson about the municipal elections denote the impotence and desperation of the supremacist government of Donald Trump in the face of the successive victories of Venezuela's democracy and Bolivarian people," he declared via Twitter, referring to the Maduro government's back-to-back successes in National Constituent Assembly and regional elections in recent months.

During his late-night speech, Maduro vowed to reinvigorate the political movement started under his predecessor, Hugo Chavez. He told supporters he plans to prioritise revitalising the country’s ailing economy.

However, according to a new poll by Venebarometro, Maduro could very well lose if presidential elections were held this week. When asked which candidate they would support, just 28.6 percent of respondents said they'd vote for Maduro.

While the opposition is yet to coalesce around a single candidacy, the pollsters suggested a generic opposition candidate could command at least 46.3 percent of the vote. A full quarter of respondents said they were undecided.