Published on 18 May 2017 by Venezuelanalysis 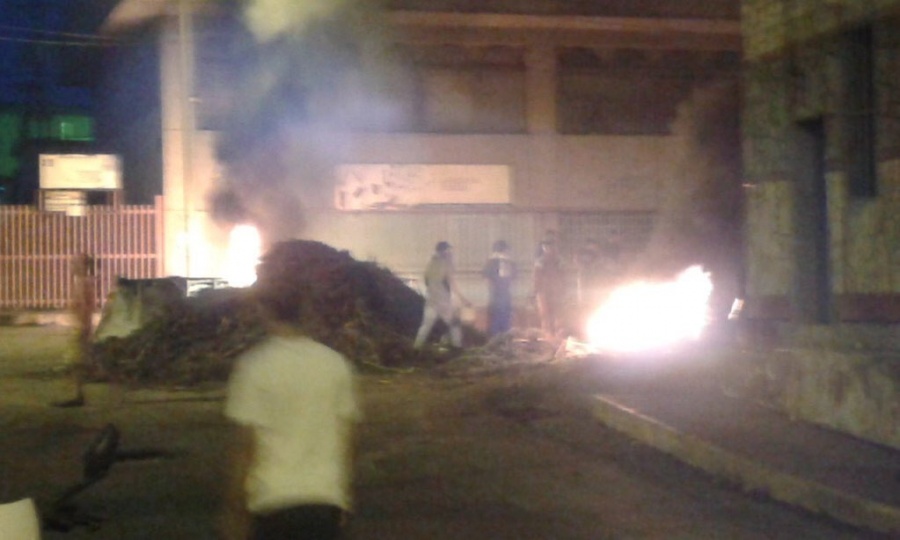 A maternity hospital was attacked in Venezuela's Miranda state Wednesday as the death count in ongoing violent anti-government protests ascends to 53.

Three newborns and one pregnant woman in labor were evacuated from the Carrizal Maternity Hospital after the facility was besieged for two consecutive days by opposition demonstrators.

According to hospital’s director, Doctor Natalia Martinho, smoke was entering the hospital from the barricades of burning rubble erected just 50 meters from the building by protesters, endangering the health of patients on the fourth floor.

The barricades reportedly prevented doctors, specialists, and all but two of the hospital’s twelve nurses from arriving for their shifts, leaving Martinho on duty for 36 hours alongside two residents.

Venezuelan President Nicolas Maduro has confirmed that a 27-year-old pregnant woman from Aragua currently in labor was evacuated along with three newborns “who could not receive their treatment for 36 hours due to the terrorist groups of the opposition”.

Over the past couple days, two more people have been reported dead in the unrest, which has seen opposition supporters clash with authorities, attack public institutions and state security personnel, and blockade roads nationwide.

On Wednesday, Manuel Castellanos was shot and killed in the vicinity of an opposition protest in Tachira state. The 46-year-old was reportedly making a purchase when he was shot in the neck and subsequently rushed to the hospital without vital signs.

Following an investigation, the Public Prosecutor’s office ordered the arrest of three National Guard sergeants to be charged with the murder. The arrests follow the indictment of two National Bolivarian Police officers and a state police functionary for the killing of protesters Luis Jose Alviarez Chacon (18) and Diego Hernandez (33) also in Tachira.

Located along the southwestern border with Colombia, Tachira has long been a hotspot of violent clashes between anti-government protesters and authorities.

Six alleged paramilitaries have also been arrested by authorities elsewhere in the state in a separate incident.

Venezuela’s Defense Ministry has ordered the deployment of 2000 National Guard personnel to the border state in order to reestablish law and order.

Elsewhere in Lara state, the local newspaper Ciudad Barquisimeto reported the kidnapping and murder of local socialist activist Pedro Josue Carrillo, whose body appeared on Thursday. According to alleged eyewitnesses, the United Socialist Party of Venezuela (PSUV) member and community organizer was kidnapped Tuesday by masked men in a blue Meru truck who were overheard saying, “pick him up, this one is a Chavista.”

Venezuela’s Public Prosecution has yet to issue a statement confirming the death.

The violent unrest continued into Thursday when a protester was fatally injured during a demonstration in Zulia state.

According to a communiqué by Venezuela’s Public Prosecution, Paul Moreno (25) was run over by a truck while at a street protest in Maracaibo. He was subsequently rushed to the hospital where he died shortly thereafter of a brain injury.

The fourth Zulia state prosecutor, Israel Vargas, has been commissioned to investigate the killing.

On Wednesday, Justice Minister Nestor Reverol revealed that according to autopsy results, Arellano – a 31-year-old student protester in San Antonio – was killed by an 11.03-milimeter metallic sphere fired from close range, indicating that the killer was “among the demonstrators”.

Twelve similar metal spheres and a makeshift pipe bomb were likewise discovered at the crime scene near to where the National Guard was positioned, suggesting that they were being fired by the demonstrators.

Reverol also noted that the steel ball bearings are similar to those that caused the deaths of Miguel Castillo and Armando Cañizales earlier this month. Despite the forensic evidence implicating protesters in the killings, the opposition has continued to blame the deaths on state security forces.

In Barinas, uncle of 17-year-old Yeison Mora has accused opposition protesters of causing the death of his nephew. The family member, Alexis Mendoza, indicated that Mora was on his way to the hardware store with his brother when he crossed paths with the demonstration and was shot in the head.

According to preliminary autopsy results announced by Barinas Governor Zenaida Gallardo, the impact to the youth’s right infraorbital nerve “was not caused by a firearm but by a marble”, which was presumably fired from a makeshift weapon used by protesters.

In response to the findings, Mendoza condemned the opposition for allegedly using his nephew’s death as “propaganda” to fuel further anti-government protests.

“We, the family, are refuting all that the opposition is doing with the death of my nephew, making propaganda with the death of Yeison, and we are going to clarify that effectively, it’s almost proven that it was a protester who shot him,” he told Venezuelan National Radio.

According to data compiled by Venezuelanalysis, 12 people have been killed directly by opposition supporters since April 4, while 8 deaths have occurred at the hands of authorities. A further five deaths have resulted from accidents caused by anti-government barricades, while eight people were electrocuted during an attempted looting. Twenty deaths have still yet to be accounted for.