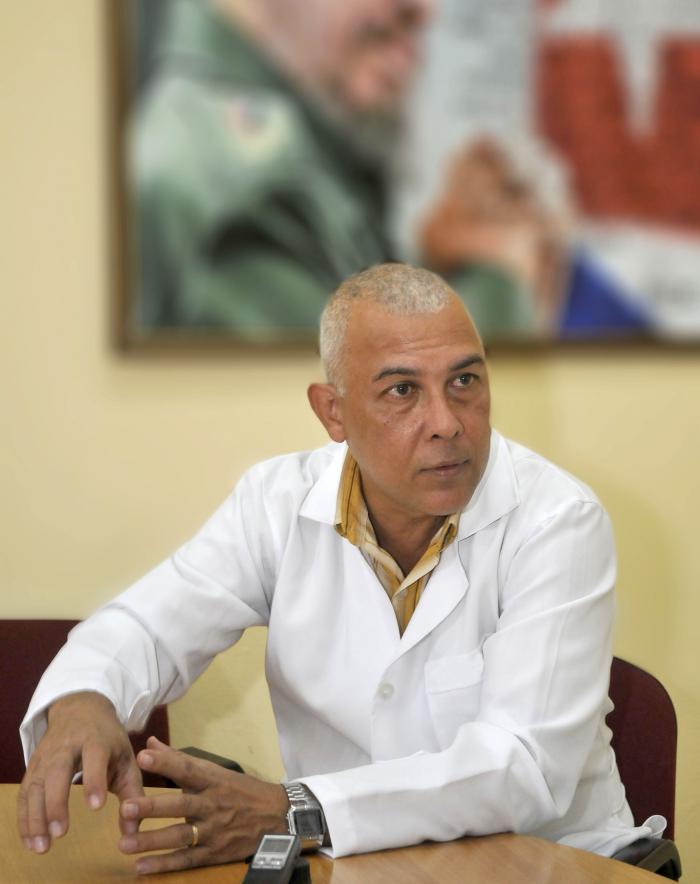 Dr. Norberto de Jesús Ramos González believes that one reaches the height of humanism when offering medical care to victims of catastrophic events, caused by natural disasters or epidemics.

A dentist by profession, he first served as head of the Cuban medical brigade in Equatorial Guinea, Africa; and later in the Caribbean islands of Haiti and Dominica, in addition to previous short periods of work in several other countries.

Although Cuba has been offering solidarity support to Equatorial Guinea for 40 years, in 2000 the revolutionary government decided to send more collaborators to establish the Comprehensive Health Program, an initiative previously undertaken in Central America, which included medical assistance in remote areas and human resource training.

“Our main challenge in Africa was malaria and the 146 members of our brigade fell ill with the disease in the first or second year of the mission. The Cuban authorities were very concerned about the situation, which is why we received a visit from the Minister of Health and other deputy ministers. Luckily no deaths occurred,” commented Ramos González to Granma International.

Describe the process of creating an internationalist brigade?

Firstly, agreements are signed between governments or ministries of health from the two countries, outlining both parties’ commitments. Cuba is requested to send a certain number of professionals and the beneficiary country pledges to provide the necessary logistical conditions.

The Cuban collaborators work in remote, hard-to-reach areas, where the population lacks comprehensive medical coverage. They work in clinics built by the community or neighborhood medical emergency centers.

Tell us about the results…

The first is acceptance from the community. The people prefer to see Cuban doctors given their open style of communication, thorough clinical exams, personalized diagnoses and cost effective medical treatment. Medicines are often administered free of charge.

The political leaders of these communities become our allies; they support the doctors in their health promotion efforts; help with vaccination campaigns and illness prevention measures.

The community comes together to build clinics, organize consultation timetables and queues, look out for the safety and wellbeing of the collaborators, and support them in the smooth functioning of their work.

Tell us about the Cuban brigade in Haiti…

I spent many years working as a representative of the Central Unit for Medical Collaboration, dealing with Latin American and Caribbean countries. When Haiti was hit by an earthquake on January 11, 2010, I was responsible for organizing and sending brigades to this neighboring country. Cuba has been providing solidarity support to this sister nation since 1998. Once reports of the earthquake started to arrive, our government decided to increase aid and activate the Henry Reeve Contingent, specializing in disasters and large-scale epidemics.

From January 13, health professionals were sent almost on a daily basis to Haiti, until there were almost 2,000 present on the island. This group also featured young undergraduates from the Latin American School of Medicine, 5th and 6th year students from Haiti and other countries.

Each one of them received a backpack containing the key essentials to work in a devastated country. Canvas medical tents were erected and from there we saved the lives of many people.
This was Cuba’s first experience putting together a brigade composed of health professionals from different nations, which included over 400 young doctors from more than 20 countries.

What happened when the cholera epidemic broke out?

We got the first reports of the epidemic in Haiti in October, 2010. The government immediately mobilized its forces to reinforce medical support there. Prevention measures began to be implemented. Firstly within the brigade, so that none of the health professionals would get sick, and later among the population. Cuban collaborators specialized in combating epidemics were sent to Haiti through December 31. We created active monitoring task forces composed of doctors, nurses, residents and interns, responsible for checking on the population, identifying target areas, locating possible infection sites, vulnerable families, and potentially undiagnosed patients. We traveled to the most distant regions of the country and visited remote communities.

Meanwhile, on entering Cuba we would undergo a period of observation, lasting over 20 days, in order to rule out any risk of infection, in addition to continually passing through disease controls on the border, in airports and departure and landing points.

How would you describe Haiti in 2012 when you were heading the Cuban medical brigade there?

I encountered a changed country, with a better health system, greater governmental concern to provide medical coverage for the population, a network of health institutions receiving international support. Necessary measures had been taken to control the epidemic. Highways and access routes to cities had also been repaired, making it easier to transport patients.

Venezuela helped to build some 20 Comprehensive Diagnostic Centers called Community Reference Hospitals. Over 700 Cuban collaborators are still working in Haiti across its seven departments, offering services in all medical specialties.

How was the Dominica brigade organized?

Tropical Storm Erika hit Dominica in August of 2015. The nation’s government appealed to our country for help. In less than 24 hours we organized a brigade of 16 volunteers. We left on August 31, in the early hours of the morning. We were unable to land due to adverse weather conditions, so we had to reroute to Martinique, from where we traveled by boat to the capital, Roseau.
We were received by the country’s director and a deputy minister of Primary Healthcare, both of whom studied in Cuba.

We were dispersed across six regions: Portsmouth, Saint Joseph, Marigot , La Plaine, Grand Bay and Castle Bruce, as well as the capital where Princess Margaret hospital is located, Dominica’s main health institution. We joined up with the members of the permanent Cuban medical brigade in the country, composed at that time of 27 members, who had been offering service there for many years. We returned on October 14.

What impact has working abroad hand on you personally and professionally?

It’s a difficult time, in terms of the conditions we face. I’m talking about the risk we run working in places with epidemics, natural disasters and endemic illnesses. What is more, we don’t have the support of a national public health network with guarantees which could support our altruistic efforts, but all this allows us grow in the face of difficulties, learn about the environment we’re working in, and strengthens us as individuals. On returning we feel proud, with the desire to continue contributing in other places.