Brigade to Cuba - 60 Years of Revolution 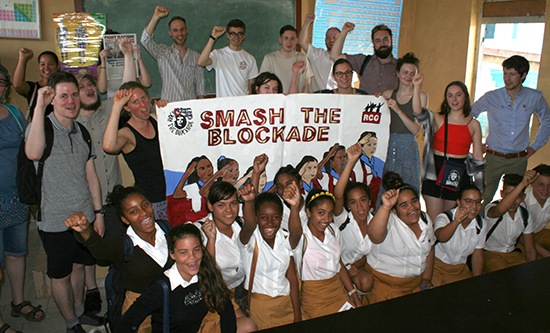 In April 2019, Rock around the Blockade sent its 14th solidarity brigade to Cuba, celebrating 60 years of the socialist revolution. Our visit coincided with the inauguration of Cuba’s new constitution, supported by 86% of voters, produced by an outstanding exercise in participatory democracy in which 8.9 million Cubans took part. In our visits and exchanges, Cubans from every walk of life shone with determination to resist the US’s attacks on socialism and continue to construct a sustainable socialist society. 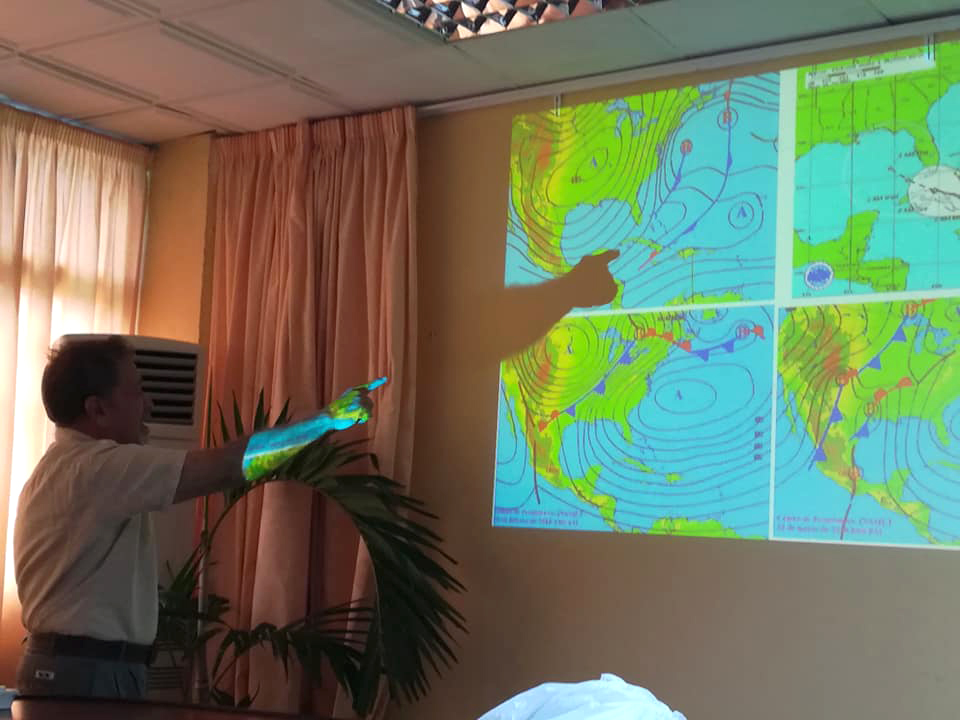 Sustainability and climate change were recurrent threads. Cuba has been a leading example since the 2006 World Wide Fund for Nature ‘Living Planet’ Report identified it as the only country to achieve a high level of human development alongside a low ecological footprint. Cuba’s planned economy geared to meet human needs makes this possible. We saw how the Leonor Perez organic co-operative supported recovery of unfertile land using wormeries and manure. At ‘La Rosita’ farm we learnt permaculture and agro-ecology techniques. We met Bruno Henriquez, from CubaSolar, who emphasised popular power in promoting renewable energy and efficiency, community by community. CubaSolar has even adapted solar panels for electric wheelchair users! Nationally Cuba aims for renewable energy to meet 24% of electricity demand by 2030, seeking $9bn in foreign investment for 200 renewable energy projects in solar, biogas and wind farms. Though Cuba only emits 0.08% of the world’s greenhouse gases, it will be disproportionately affected by climate change. However, just as Cuba has systematic plans for confronting hurricanes and US invasions, ‘Tarea Vida’ is a 100-year plan to protect against the effects of global warming. Dagoberto Lopez Perez, director at ‘La Rosita’ explained ‘we are moving low lying populations further inland, preventing new housing construction in areas prone to sea flooding. We are breeding strains of crops resistant to higher temperatures. The revolution is preparing, climate change is coming.’ 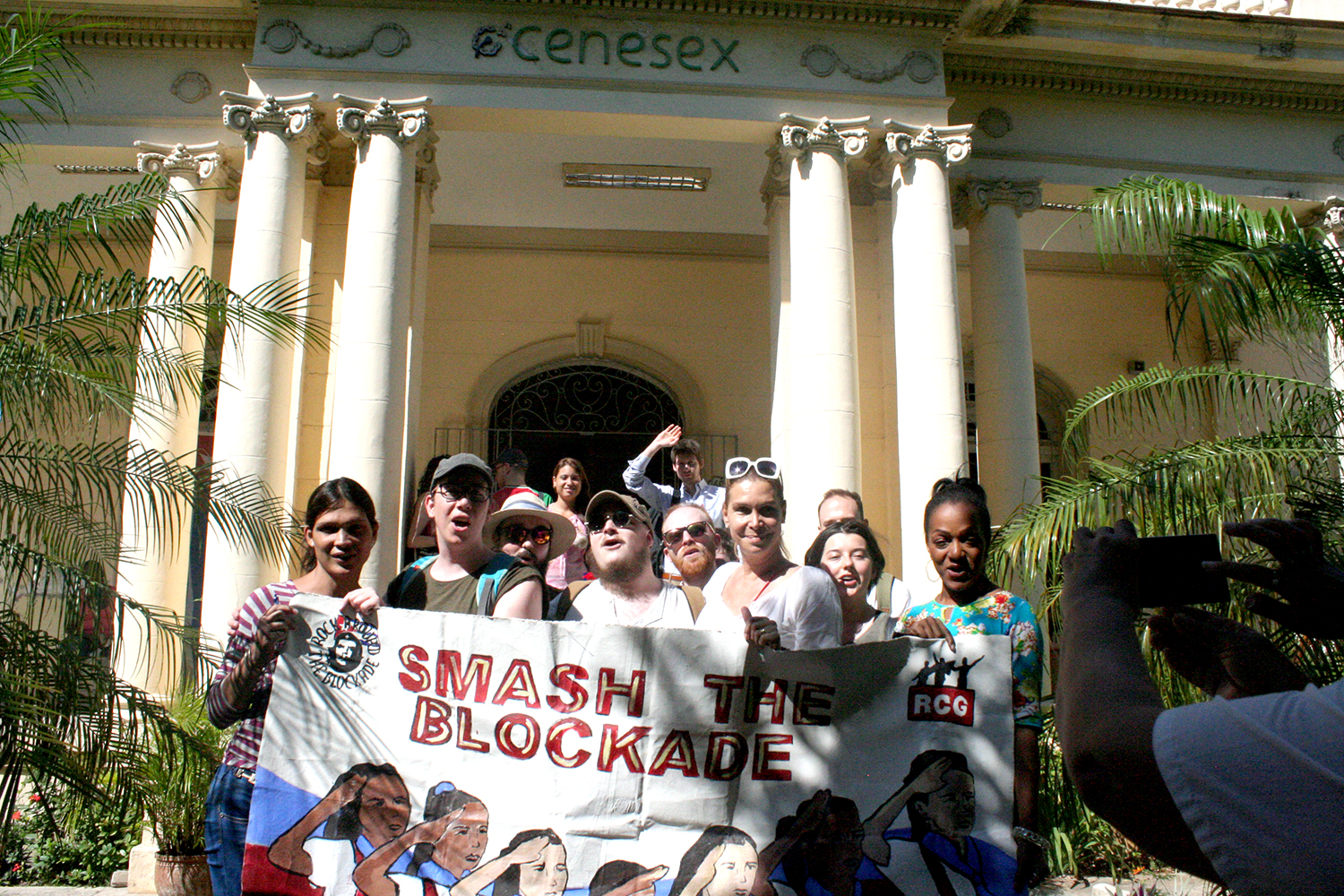 ‘As a trans-woman, navigating the NHS for the last 4 years, I was keen to compare my experiences. If you are trans in Britain, you either need a lot of money, or a lot of patience. The approach at CENESEX (National Centre for Sexual Education) is radically different. If you are trans, you talk to your family doctor, or visit a polyclinic. There is virtually no waiting time for referrals and mental health support is provided not just for the person transitioning, but for family members also.’ Lucy (brigadista)

At CENESEX, research specialist Anabelkis Perdomo Caceres discussed trans-healthcare, explaining that any-one can ‘just come and knock’ and get support through TransCuba, a large social network established 17 years ago. Transitioning is free under the universal health system, including in-depth psycho-logical and social preparation. 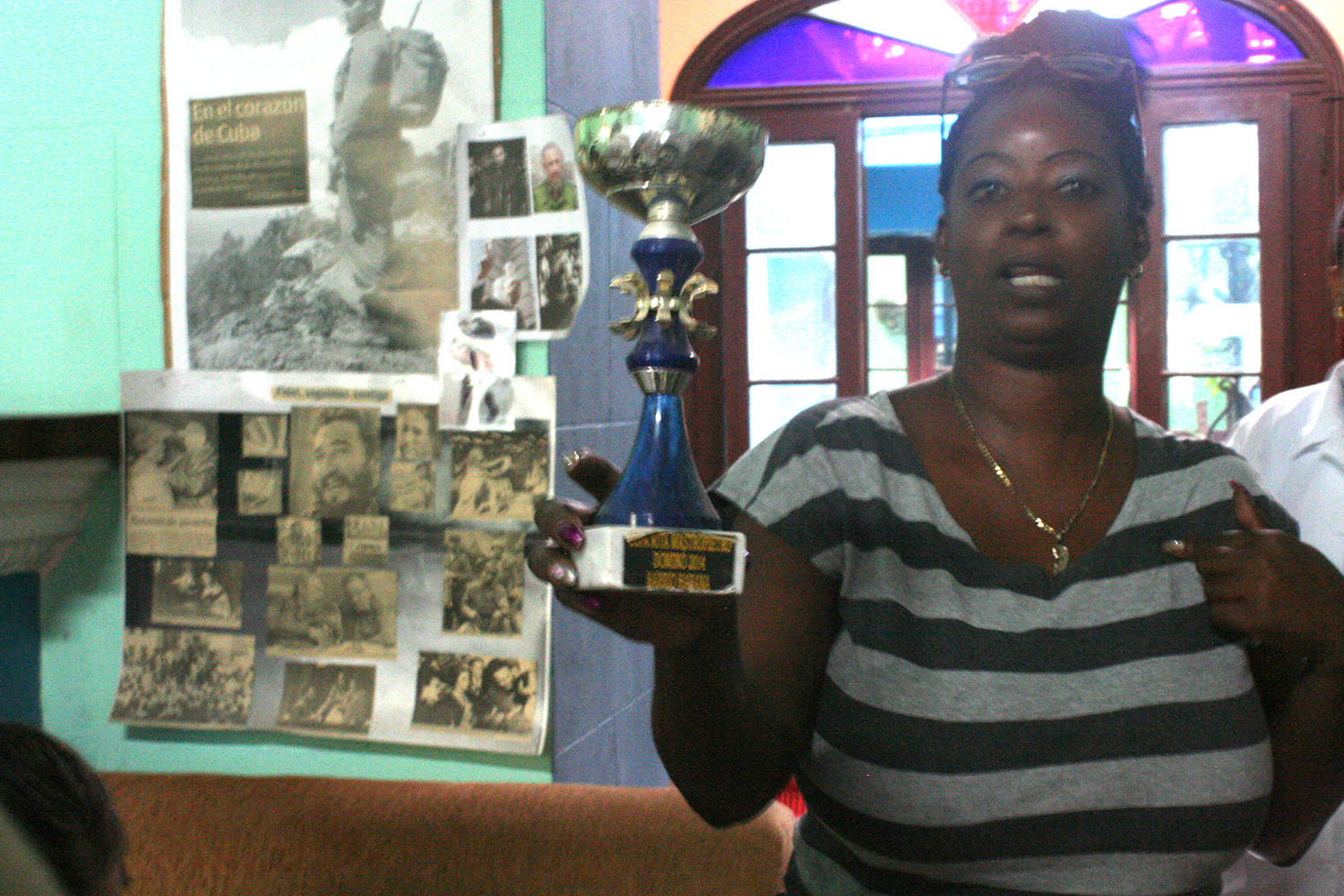 Diana Rodriguez of the Cuban Women’s Federation highlighted the Evoluciona campaign against sexual harassment on the street. We saw their billboards on roadsides.  Before the revolution, ‘just for being born a woman, you didn’t have the same rights. If you were poor that was worse. Being black, worse again. After the triumph of the revolution we worked hard to change this. Women’s rights and opportunities were made equal, today women make up 53% of parliament, 65% of professionals, we have so many work groups promoting women’s wellbeing.’ But despite these gains there is still work to be done challenging ‘cultural elements ingrained in society – historic stereotypes passed from generation to generation. We are still working on this, educating families and communities.’ 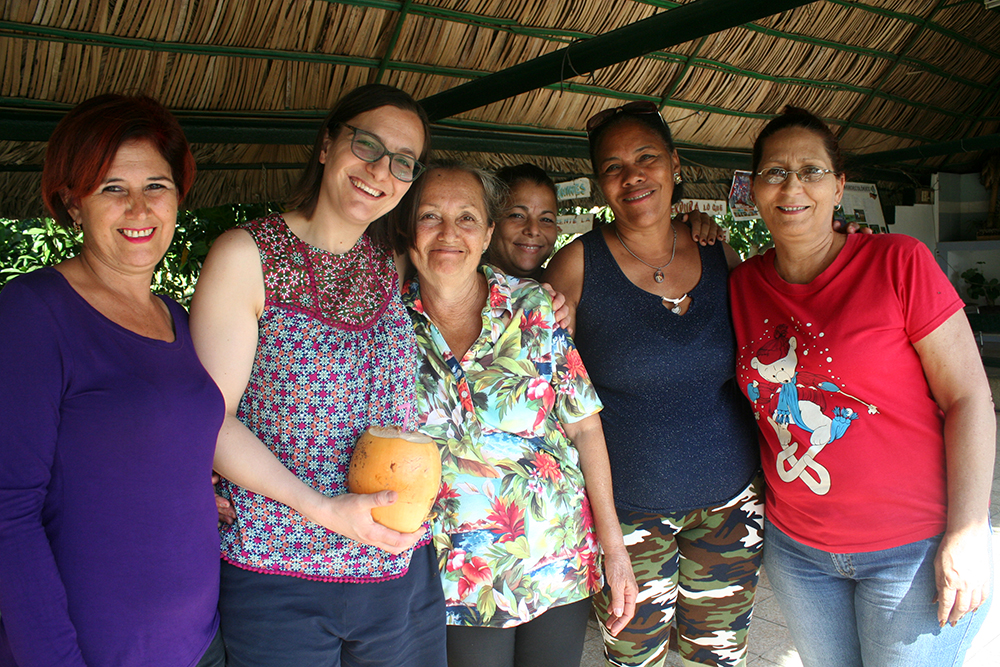 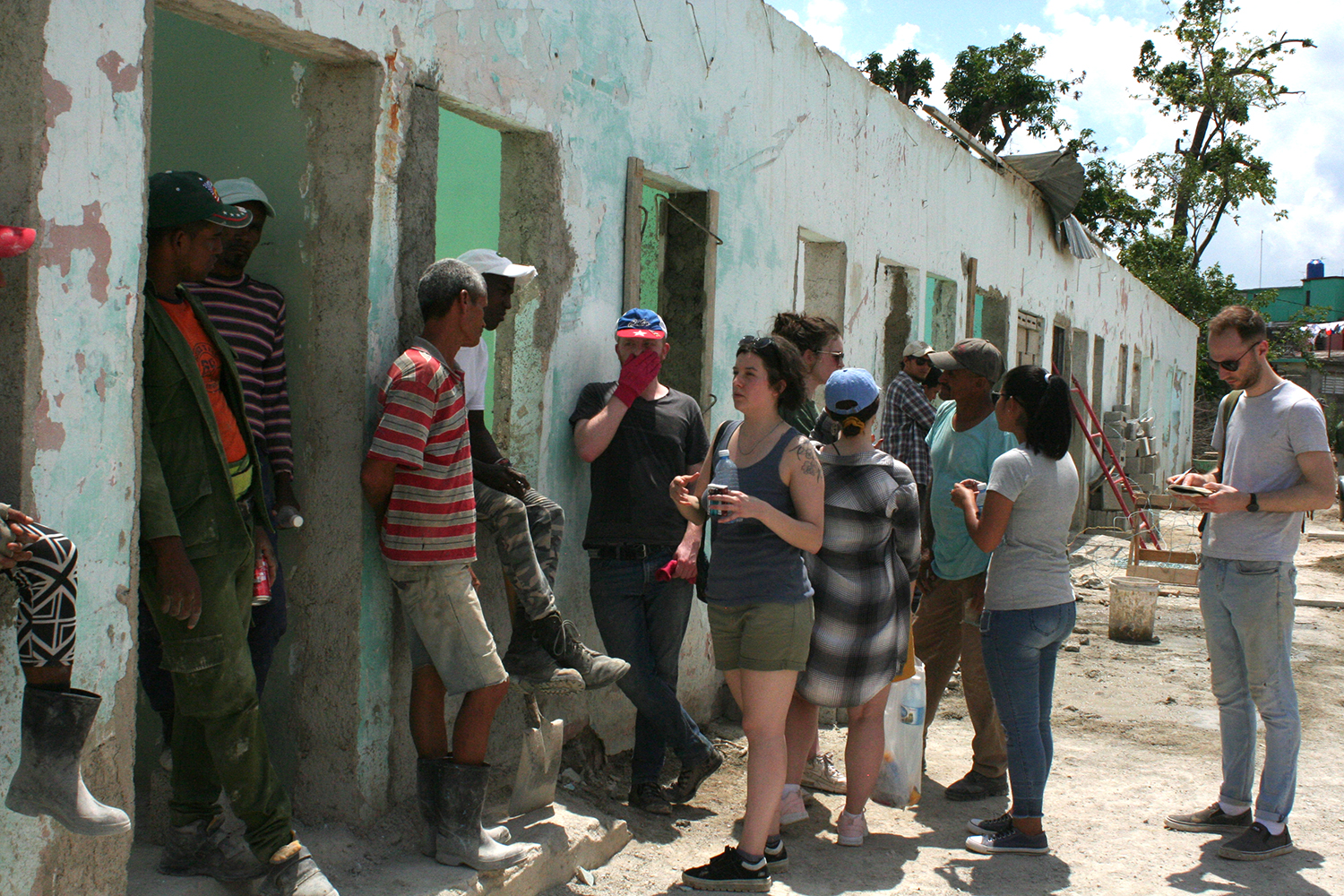 ‘By the time of our visit in April, over 80% of the homes destroyed by January’s tornado had already been rebuilt. The aim is to complete the rebuilding process by November! Where is the equivalent process for Grenfell?’ Joe

We volunteered at a construction site, part of an effort to rebuild 5,330 homes destroyed by a rare tornado. The Ministry of Industry consulted the community, drawing up plans. Volunteer labour brigades are trained by professional workers whilst municipalities produce and recover whatever building materials they can.

The blockade makes house-building expensive. However, the commitment is to rebuild to a higher standard. Nationally, the construction programme aims for each municipality to produce and source enough materials to build two houses (338 nationally) per month. 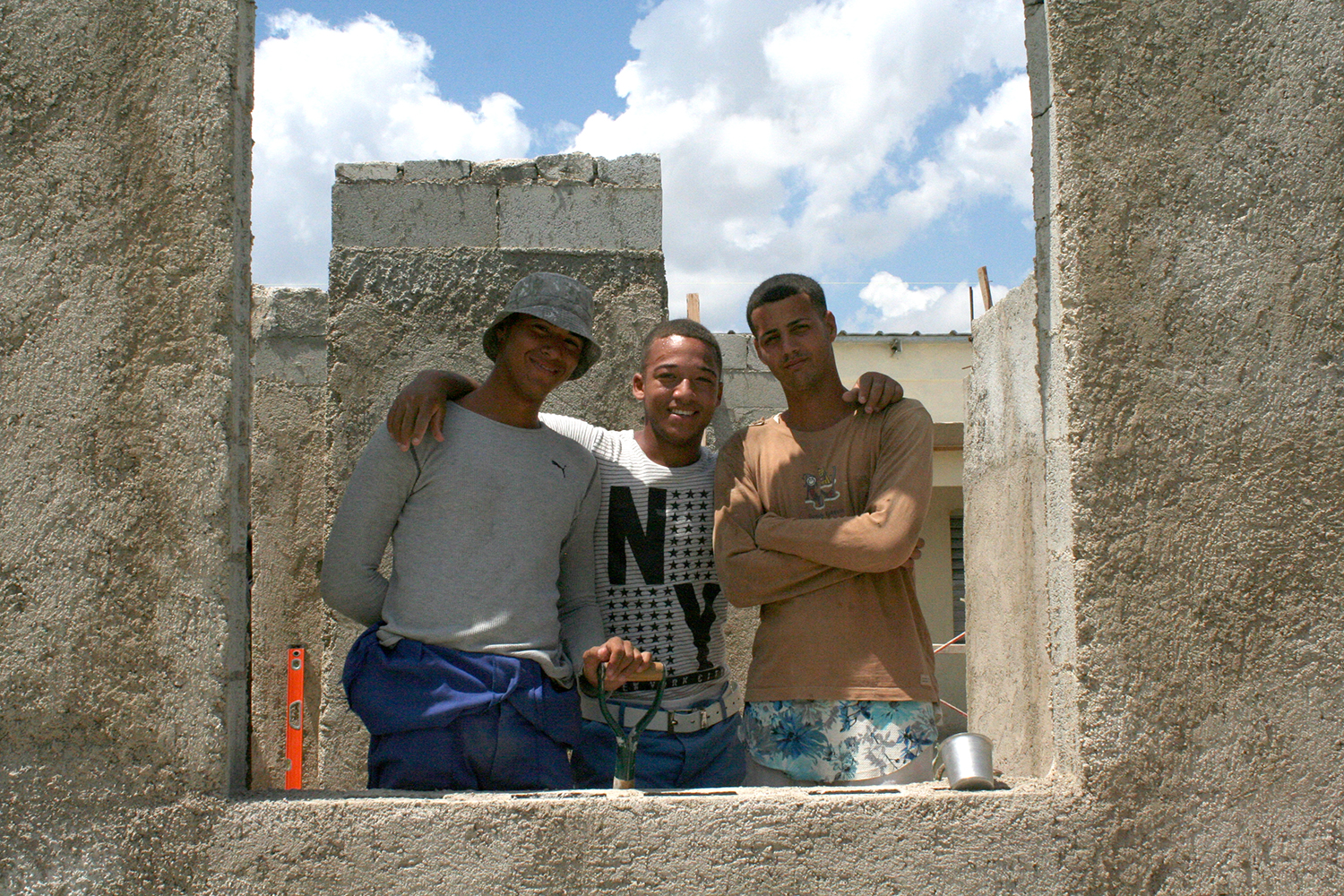 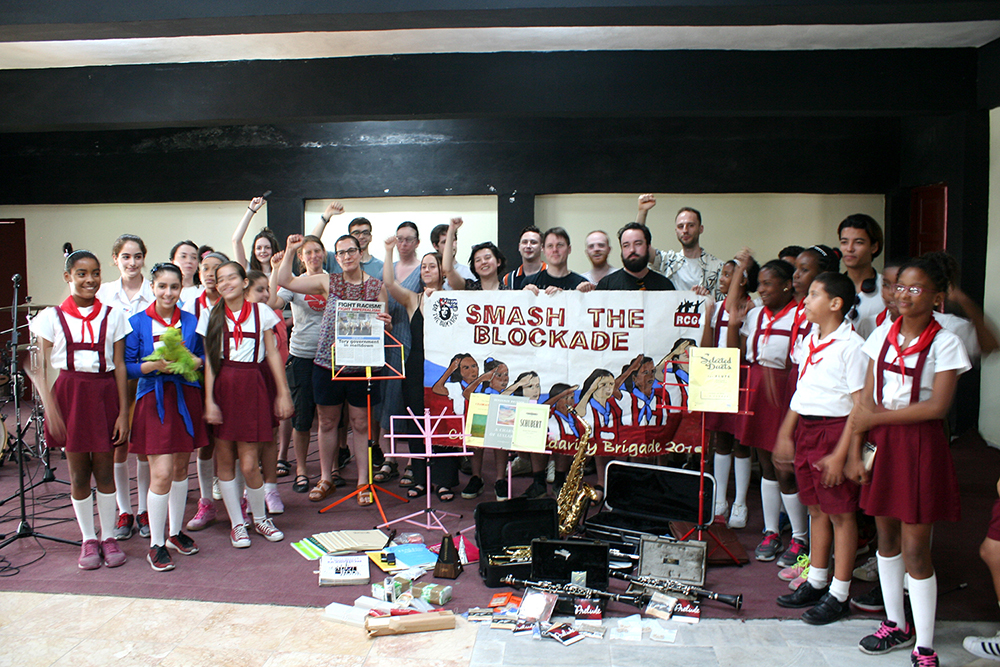 In a political act to break the criminal US blockade we brought caseloads of musical instruments and children’s toys, donating over £900 to the repair fund following January’s tornado. The toys were delivered to the affected El Cochito Azul nursery in Guanabacoa.

Collaborating with the ‘Piano to Cuba’ project we donated £1000 of musical instruments and equipment to the Guillermo Tomas music school. The extra-territorial tentacles of the blockade froze ‘Piano to Cuba’ funds through PayPal and Stripe, so we were determined to deliver piano hammers for a Grand Piano. Principal Monica Maestri emphasised ‘the school responds to the revolutionary message of equal opportunities and possibilities for all, accepting any child showing musical aptitude’. 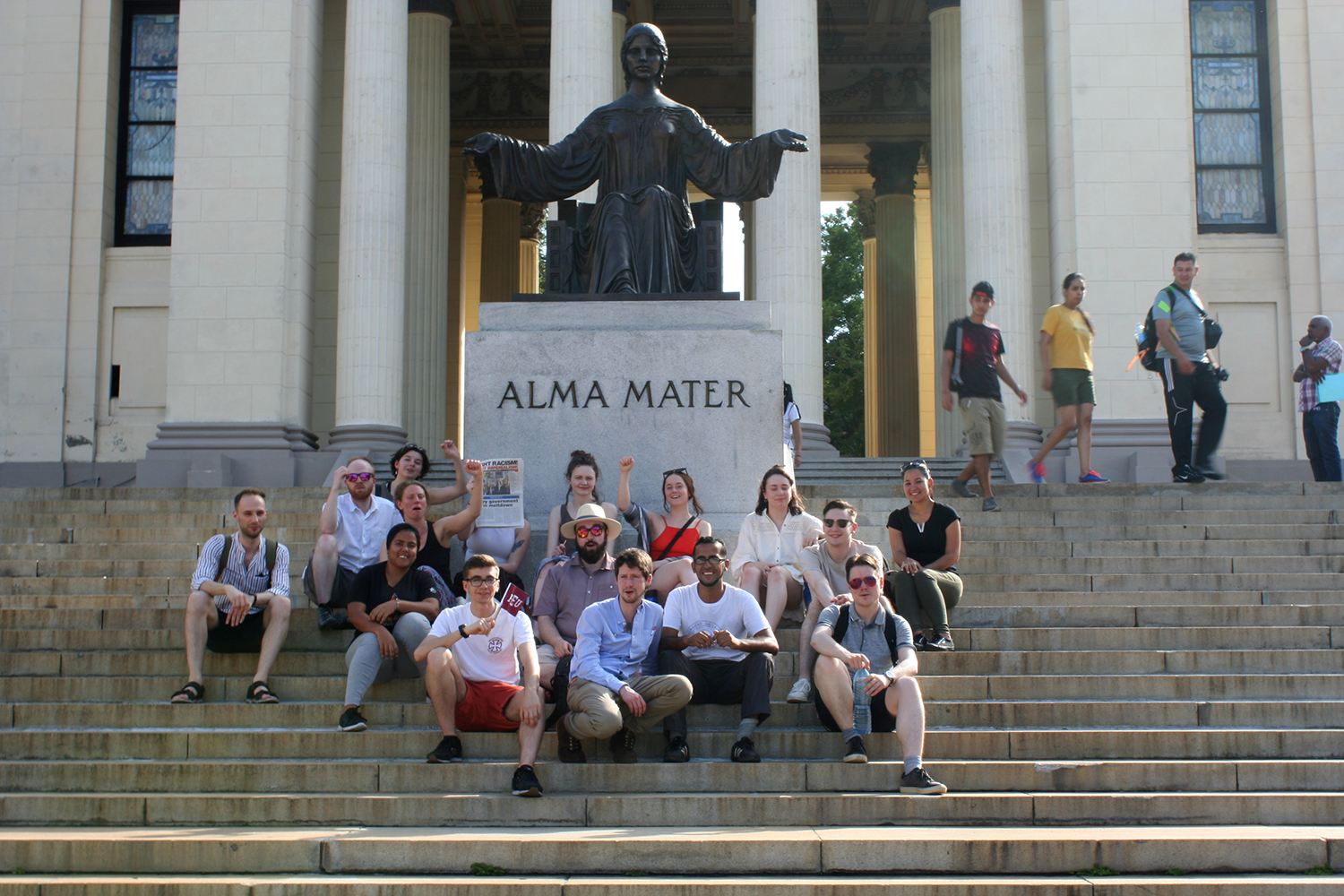 Training doctors for the world 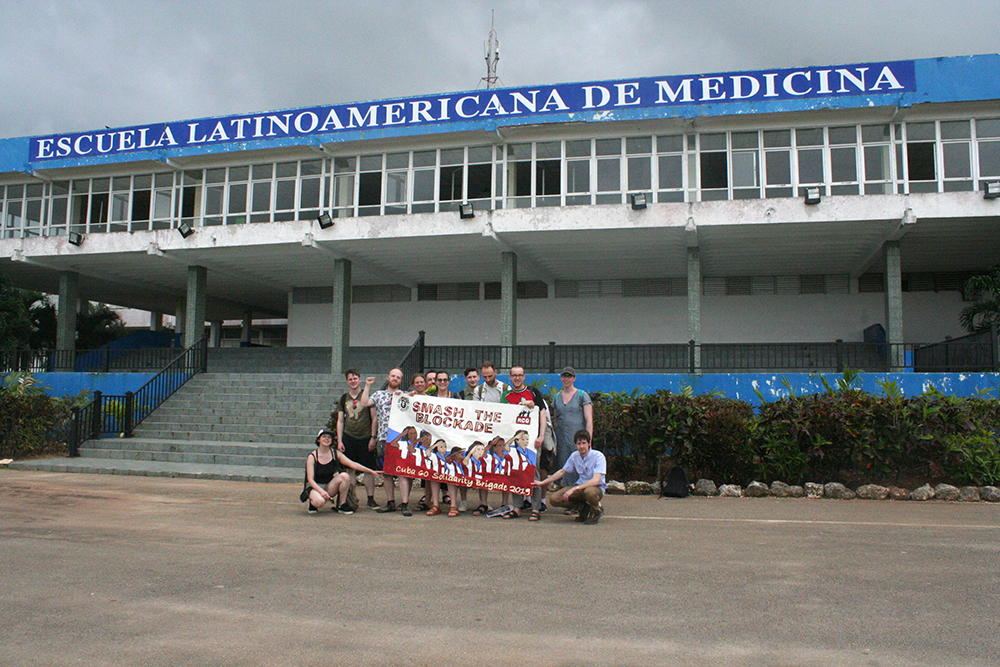 Cuba’s internationalist health pro-grammes have benefited 186 countries. ELAM (Latin American School of Medicine) has transformed Havana’s old naval base into a school that has trained 29,139 doctors for free so they can serve impoverished communities in their home countries. We met students from Palestine, Sudan and Western Sahara. ELAM has even trained 84 students from the US. As Victor Diaz, one of the founders of the school, reflected, ‘We take pride and satisfaction in our international commitment to health. Some US families take pride in sending their sons to war. Why shouldn’t we be proud of sending our sons and daughters to save lives?’ 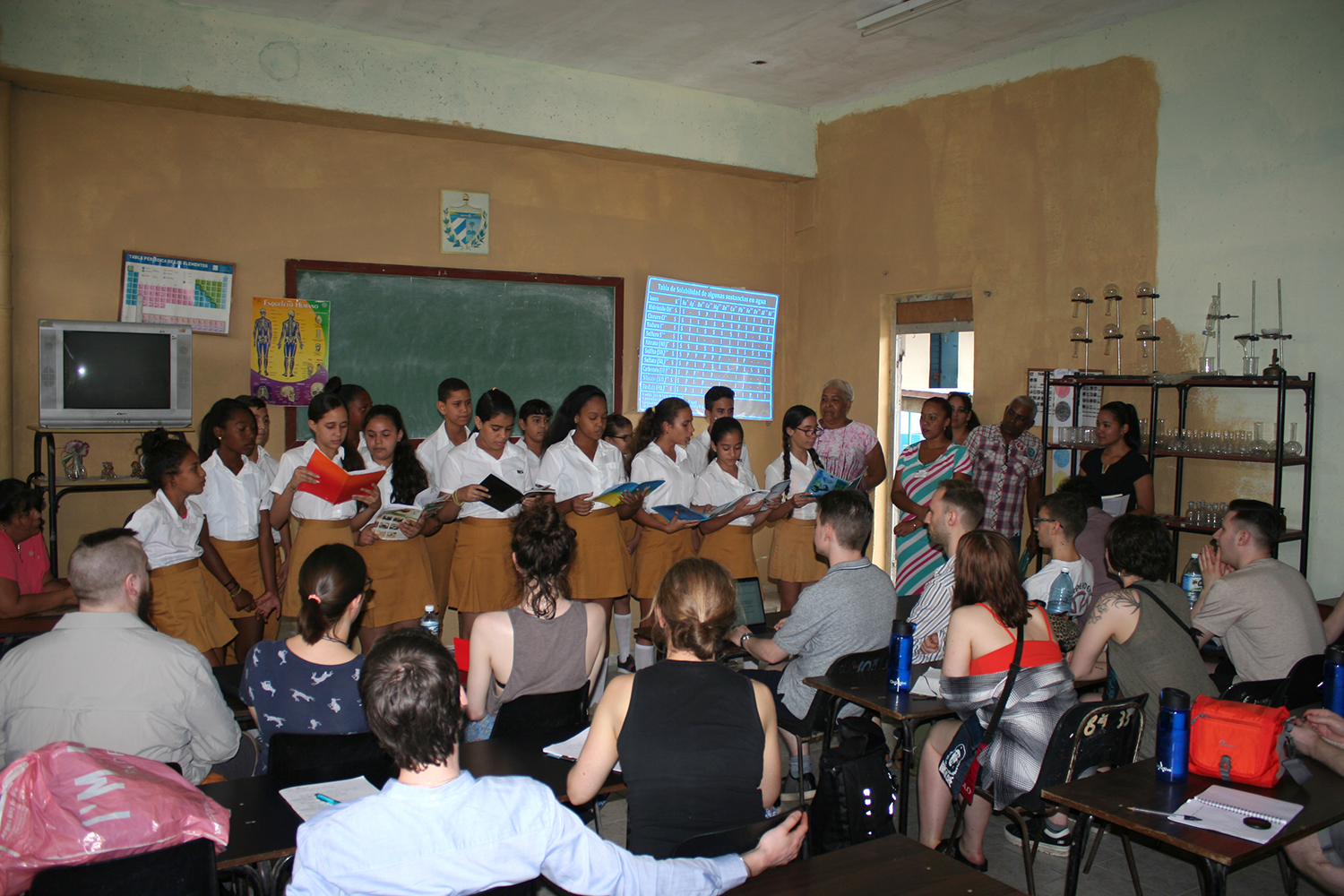 We visited the Che Guevara Pioneers’ Palace, one of 180 centres which facilitates school children to develop new vocational interests.

‘The Pioneers are an organised body, they hold a regular national congress at which they question members of the council of the state, they guard the ballot boxes during elections. Imagine ordinary school children in Britain questioning government ministers in a forum where they had to action the points raised! Cuban young people are not slandered, or ignored, they are treated seriously, they are the future of the revolution.’ Ruby

Jose Maury, co-ordinator from the Union of Young Communists, explained: ‘Our objective is to develop the revolutionary spirit of young people. You need to organise this. No social transformation is sustainable if you don’t work with people ideologically.’

At the William Soler school for multiple, complex educational needs we saw how children were supported from birth to 19 years, with the focus on education and life skills. They too are considered the future of the revolution. Ailette Borges, president of the Federation of University Students in Havana explained how law students analysed proposals made during the constitutional referendum, whilst journalism students focused on making the process more accessible to young people. Julier, a computer science student, designed the ‘portales del ciudadano’ (citizens’ portals) websites trialled in three local municipalities: ‘With the expansion of Wi-Fi in Cuba, we are determined that elected delegates will be even more transparent and connected with their citizens.’

The role of online media was prominent in our exchange with CubaDebate, Cuba’s most visited website. As editor Sergio Gomez emphasised, ‘We have a huge political culture, people get angry if they are treated as fools by the media. We talk about problems upfront, promoting discussion through the comments section. Our users are not merely readers but heavily influence and shape our content. We have proved you can talk about any issue; the people will be more supportive as a result.’ 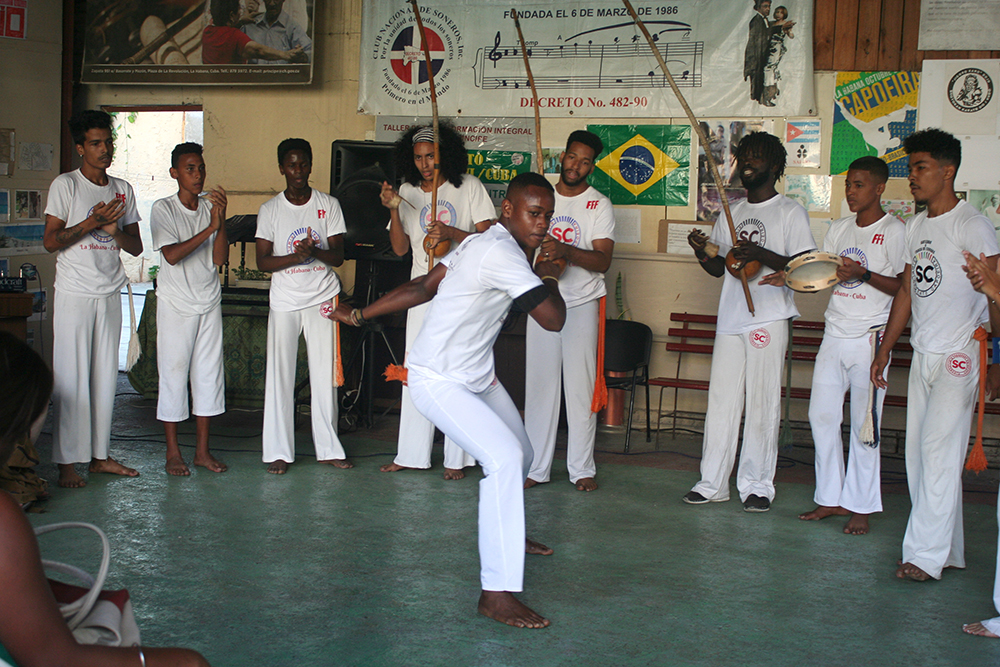 We danced at pop-up DJ sessions on the Malecon, perused bi-annual art installations with provocative reflections on the constitution, attended rock concerts at Pabellon Cuba, and art exhibitions at the renowned Casa de Las Americas. All for free.

Rafael Gonzalez Munoz of the Hermanos Saiz Association, which organises over 3,000 young artists, explained ‘In the 90s, we had the special period. Cuba was virtually left alone defending socialism. But Fidel Castro said that the first thing we need to save is culture. We might have lacked basic foods and goods, but the revolution from a social-cultural point of view could not be destroyed.’

Ernesto, curator at Casa de Las Americas, told us that recent claims of art censorship by Amnesty International were nothing new, but ‘the latest in a legacy of fear and terror that has historically been used against socialism. Article 349 is not against artistic creation; it protects the rights of artists once their work is commercialised. Cuban artists themselves pushed for the protection of their culture, removing racist, sexist or distorted content from public spaces.’ 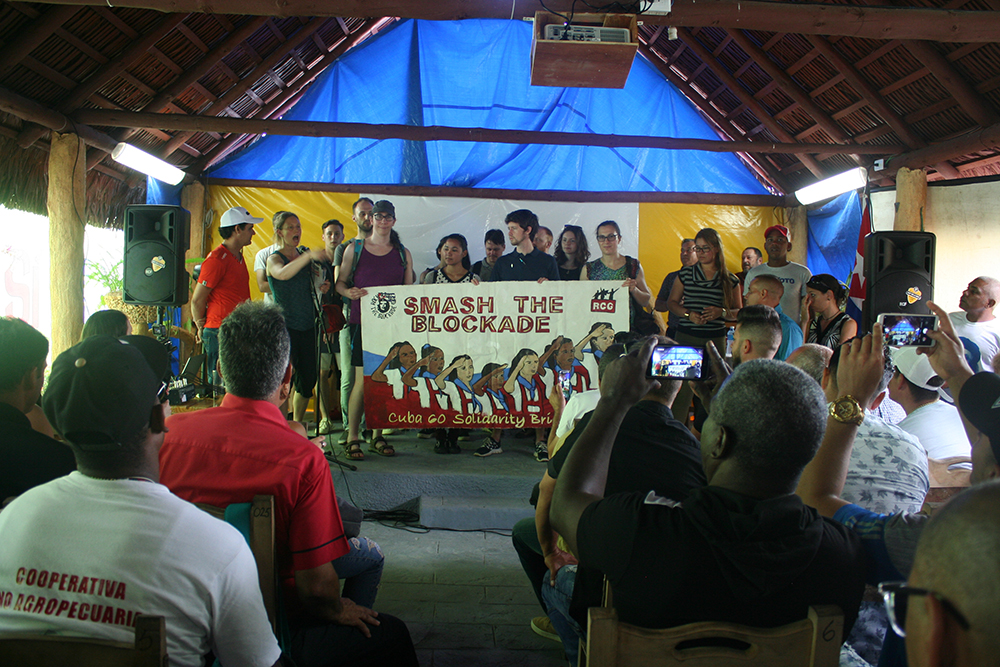 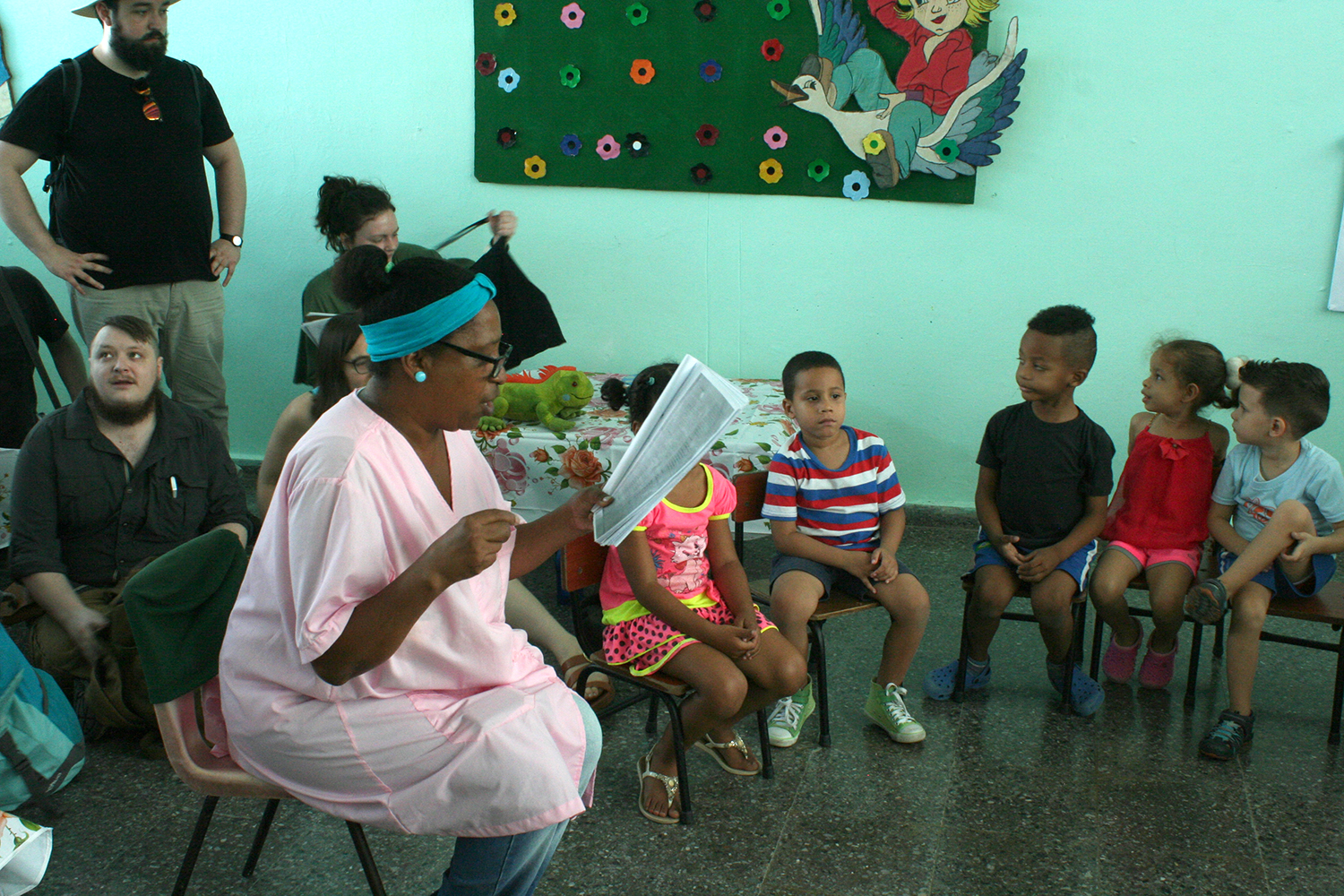 At the ‘New Life’ day centre, we learnt about the integral programme for older people: physical activity, affordable day centres, care homes where clothing, shoes and pocket money are covered, even special university courses with 18,000 graduates in Havana alone. The older generations who made the revolution are recognised and protected. No-one is left behind.

Dulce Maria, 83, told us ‘I am grateful to the revolution, that us poor people could progress, education is free, healthcare is free, through the grandparents’ centres and circles, there is so much help for older people.’ 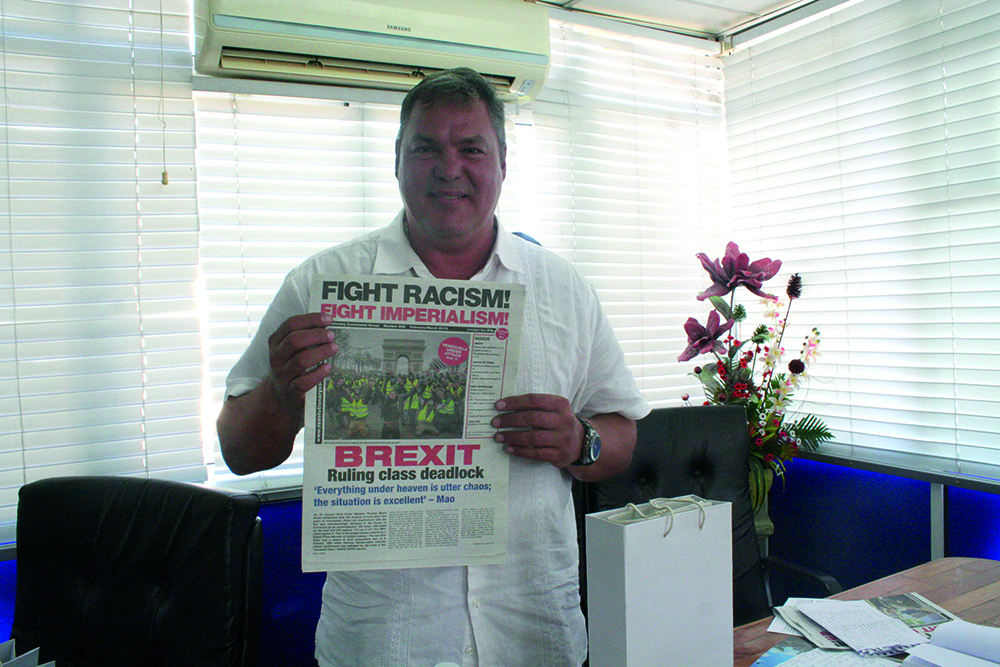 Ramon Labañino from the Cuban 5

More than 8 million Cubans participate in their local Committees for the Defence of the Revolution, (88% of people over 14). These building blocks of democracy organise everything from vaccination plans, blood donations and pest control, to holding constitutional consultations debates. At a street party at CDR 1, Zone 102, Altabo, Havana, neighbours declared their readiness to resist any US hostility; ‘We did it, we still can do it, and we will do it again!’

CDRs work closely with their voceros (spokespersons) in the muni-cipal assemblies. We met Teresa Viera, municipal and provincial delegate from Cerro. ‘I do not receive a salary, I do it out of desire to help my community. Every Wednesday, my neighbours tell me their problems, I take these to the institutions who, elected by us, are obliged to answer. If they do not fulfil this, we have the right to remove them. Cuban socialism is not perfect, but the first thing we did was run a literacy campaign [1961], so people could learn their rights. This promoted political consciousness, the only thing that has allowed us to survive this cruel blockade and the special period of the 1990s.’

We have a role to play here in Britain. As Belkys Lay Rodriguez, Communist Party Central Committee member, emphasised ‘I am convinced that the best form of solidarity that you can give to Cuba is political support. How can we break the media lies? How can we mobilise against the blockade?’

The task is before us.