On the date of Venezuelan national hero Simon Bolivar’s 1815 letter from Jamaica, outlining his vision of anti-imperialist and revolutionary solidarity across the Americas, Venezuela launched their institute for international solidarity. On 6 September 2020 the Revolutionary Communist Group participated in the online launch of the Simon Bolivar Institute for Peace and Solidarity Among Peoples, hosted by Minister of Foreign Affairs Jorge Arreaza and President of the new institution Carlos Ron, who thanked the RCG for our solidarity campaigns and protest outside of the Bank of England demanding they return the £820 million of gold stolen from Venezuela.

Venezuelan President Nicolas Maduro greeted the meeting, livestreamed to thousands of viewers, to encourage participants to ‘go and bring the truth of Venezuela, and with the truth win peace, sovereignty, independence.’ Following speakers included Mireille Fanon, daughter of the anti-imperialist revolutionary Frantz Fanon, and director of the Tricontinental Institute for Social Research Vijay Prashad. Speakers highlighted the brutality of capitalism, its failure to address human and environmental needs, exemplified through the litany of deadly failures from the capitalist countries in dealing with the coronavirus pandemic.

The ratcheting up of imperialist attacks – the intensification of sanctions on Venezuela, Cuba, Iran and China – were emphatically condemned, alongside all forms of imperialist looting and plundering. Evo Morales, the former Bolivian President ousted in a violent US-backed coup last November, spoke out against the Bolivian coup dictatorship while declaring that a united peoples of Latin America and the Caribbean will fight to defeat imperialism. A representative from ALBA Movimientos de Colombia, Laura Capote, identified that ‘the launching of this institute today is a political statement to follow the roots of Simon Bolivar. As he said in the Jamaica letter, it’s not just about independence – it’s independence with the possibility to build a revolutionary future.’ 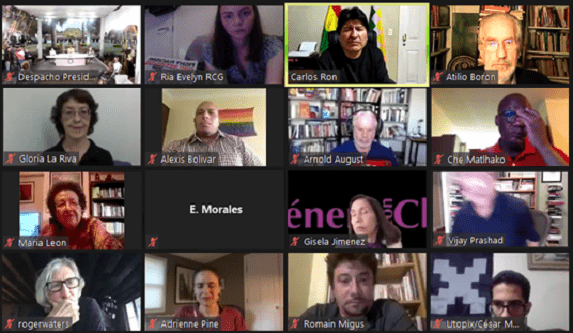 Video messages of support and solidarity were shown from leaders across the continent, including Raffael Correa, the exiled former President of Ecuador and current candidate for Vice Presidency of the progressive 'Union of Hope' in the 2021 Ecuadorian elections; Fernando Gonzalez, Cuban national hero and President of Cuba's solidarity institution ICAP; and Fernando Lugo, former President of Paraguay deposed in a right-wing paramilitary coup. Among the other 105 participants in the meeting were social movements, Communist organisations and solidarity groups from around the world, as well as US Presidential Candidate for the Party of Socialism and Liberation Gloria La Riva and musician Roger Waters, who spoke for us all when he said ‘we want to see the Bolivarian Revolution all over the world.’