Marathon for Cuba! £700 and counting raised! 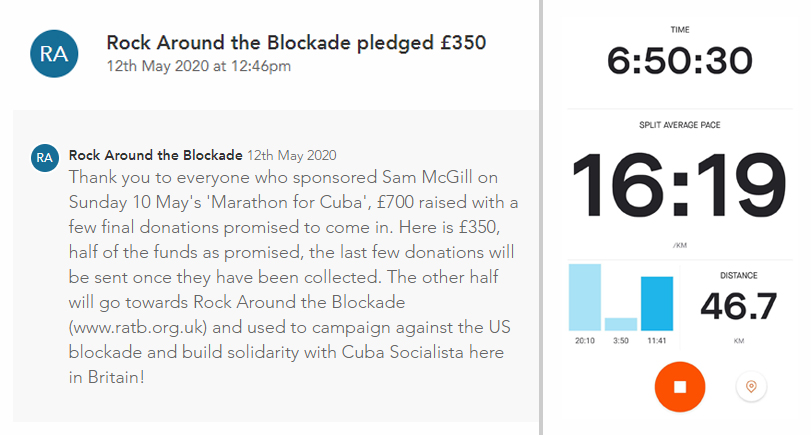 Thank you so much to everyone who liked, shared and donated to Sunday's 'Marathon for Cuba'. 46.7 kilometres completed (29 miles)! You can see the videos uploaded as part of the run on our facebook. Any final donations can be sent via Go Cardless here:

Whilst we are still collecting in the final donations, we have already made a £350 payment to Cubanos en UK's emergency ventilator appeal, and will send on any final cash collected. Their appeal has nearly reached it's goal so please keep sharing and helping them smash their £25,000 target.

Rock Around the Blockade will use the remaining half of donations to campaign against the US blockade and build solidarity with Cuba Socialista here in Britain. We are producing a new edition of our pamphlet 'The streets are ours!' which will cover the fundamentals of Cuba's 60 year revolution and why we need to defend it from the escalating threat of economic warfare and intervention.

Watch this space for meetings, protests, campaigns and events