US hypocrisy on display at the UN 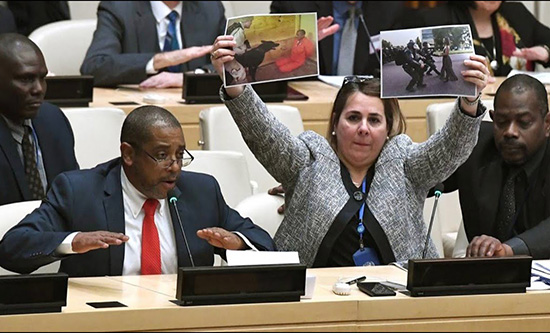 On 16 October US delegates to the United Nations announced a political campaign called ‘Jailed for What?’. The campaign aims to portray Cuba as a politically repressive country. The US asserts falsely that Cuba has 130 political prisoners who are being punished for exercising their right to free speech. Cuban and Bolivian delegates disrupted the campaign’s launch meeting at the UN, banging tables and chanting ‘Cuba sí, bloqueo no!’ (‘Cuba yes, blockade no!’) to drown out the allegations coming from US delegates. Cuba dismisses the allegations, saying that the US aims to use this as an excuse to maintain the economic blockade of the island. Referring to the Trump administration’s renewed hostility towards Cuba (see FRFI 259) the Cuban Am­bass­ador to the UN, Anayansi Rodriguez Camejo, released a statement after the meeting: ‘the United States lacks the morals to give lessons, much less in this matter’ and ‘It is part of the actions aimed at subverting the legitimately established constitutional order and of the interventionist agenda that has gained renewed momentum under the current administration, whose fascist, racist and xenophobic ideas are a matter of grave concern in the international community’.

The website for the US embassy in Cuba states that: ‘The estimated 130 political prisoners held by the Cuban government are an explicit sign of the repressive nature of the regime and represent a blatant affront to the fundamental freedoms that the United States and many other democratic governments support.’ The figure of 130 comes from a 2010 report from the anti-Cuban activist Elizardo San­chez of the Commission on Human Rights and National Reconciliation (CDHRN). Sanchez is a committed counter-revolutionary. He has openly called for military intervention in Cuba by the US. His report claims a total of 141 prisoners, 10 of whom have since been freed for health reasons, leaving 131. Sanchez’s numbers include individuals who were imprisoned for violent crimes like armed incursions into Cuba and terrorism.

In 2010, Amnesty International produced its own report, less favoured by the US political establishment, which listed 27 political prisoners in Cuba. However, the individuals on this list were in prison for taking money from the US and using it to ‘engage in activities perceived as subversive and damaging to Cuba’, which is illegal under international law. So, even outside Sanchez’s dubious list, external forces seek to portray people who threaten the security of Cuba as political prisoners seeking their freedom. All nations of the world imprison people who commit crimes against the state; in Cuba this is done in the context of defending the workers’ revolution rather than the in­ter­ests of a capitalist ruling class. Today, even Amnesty International recognises only one prisoner of conscience in Cuba.

In 2016 then President Raul Castro addressed a joint conference with Barack Obama on the subject of similar accusations. Raul rejected the allegations and said: ‘Just mention the list. What political prisoners? Give me a name or names or when after this meeting is over, you can give me a list of political prisoners, and if we have those political prisoners they will be released before tonight ends.’ Just as with the more recent attacks, the US failed to name political prisoners or provide evidence.

As the Cuban ambassador pointed out, the US has no moral authority when it comes to political prisoners or repression of free speech. There is actually a whole group of US political prisoners on the island of Cuba – in Guantanamo Bay Detention Camp, operated by the US on land ‘rented’ from the Cuban state since 1903 under the auspices of the Platt Amendment which violated Cuba’s sovereignty. Cuba objects to the occupation of the land and has cashed only one rent payment (by mistake, according to Fidel Castro). Inmates in Guantanamo Bay are detained indefinitely without trial and reports of torture, sexual degradation and other such abuses have surfaced throughout the 14 years that it has been open (see FRFI 190).

A further example of the US’s contempt for human dignity was highlighted by the Cuban ambassador, who noted, ‘The imprisonment of children would have rightly justified the name “Jailed for What?”’ In early 2018 it came to light that migrant children were being separated from their families at the border with Mexico and were being kept in cages akin to those used for animals. One was found to have 20 children inside, and children as young as five were separated from their parents with no idea of what was going on. To hear allegations of human rights abuses from a state guilty of these crimes is farcical. Cuba must be defended against such blatant and unfounded political attacks.