11th anniversary of the incarceration of the Cuban 5

On Saturday 12 September 2009, to mark the 11th anniversary of the incarceration of the Cuban 5, over 60 people protested in a busy shopping street in the Angel, near central London , to demand the release of the Cuban 5, as part of an international day of action.

The event was called by Rock around the Blockade (RATB), a campaign in solidarity with socialist Cuba and against the US blockade, to demand the immediate release of the five Cuban heroes. Under the title Break the Chains: Free the Cuban 5, Free all Political Prisoners of Imperialism, the rally highlighted the use as a torture camp of Guantanamo Bay , in illegally occupied Cuba , to hold prisoners of the imperialist ‘war on terror’. Speakers also exposed the situation of refugees and asylum seekers in Britain , thousands of whom are daily detained and deported under Britain ’s racist immigrations laws. Detainees include nearly 500 children currently incarcerated.

People spoke passionately on the megaphone about the unfair trial of the 5 as well as the CIA’s involvement in training and supporting known terrorists Luis Posada Carriles and Orlando Bosch. Protesters also spoke out against other recent crimes of imperialism and its allies, such as the military coup in Honduras and the continued occupation of Palestine and Afghanistan . The event was supported by comrades from the Movement of Ecuadorians in the UK (MERU) and other left wing groups, as well as passers by who joined in to hand out leaflets with information about the Cuban 5.

Also today, RATB comrades from Manchester and Liverpool, cities in the north of England , took to the streets to publicise the case of the Cuban 5. Members of RATB in Edinburgh , Scotland , marched to the US Consulate with Free the 5 banners, leaflets and petitions.

RATB was founded in 1995 by members and supporters of the Revolutionary Communist Group. Since then we have sent ten brigades to Cuba , providing solidarity material to Cuban youth. Over the years we have consistently protested to demand freedom for the Cuban 5, as well as organising street events, meetings, day schools, film showings, educationals and live music events to provide a voice in support of socialist Cuba from within imperialist Britain. 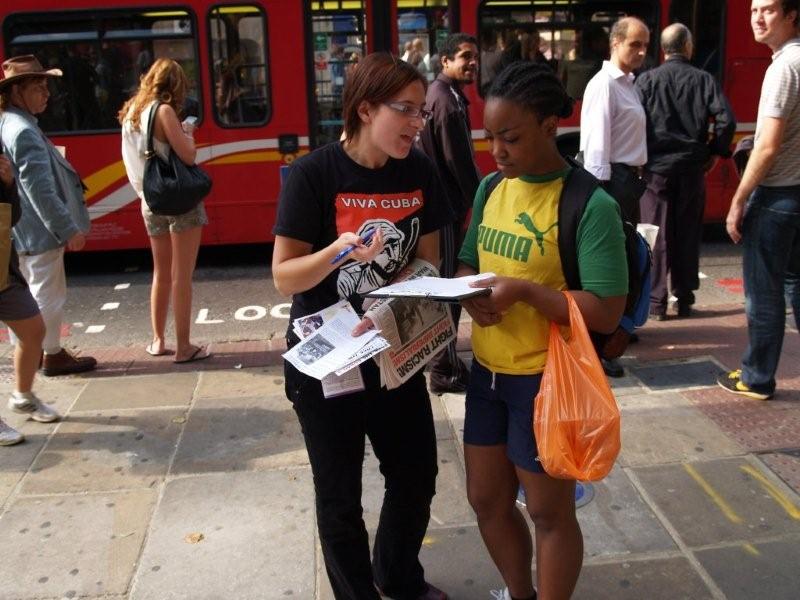 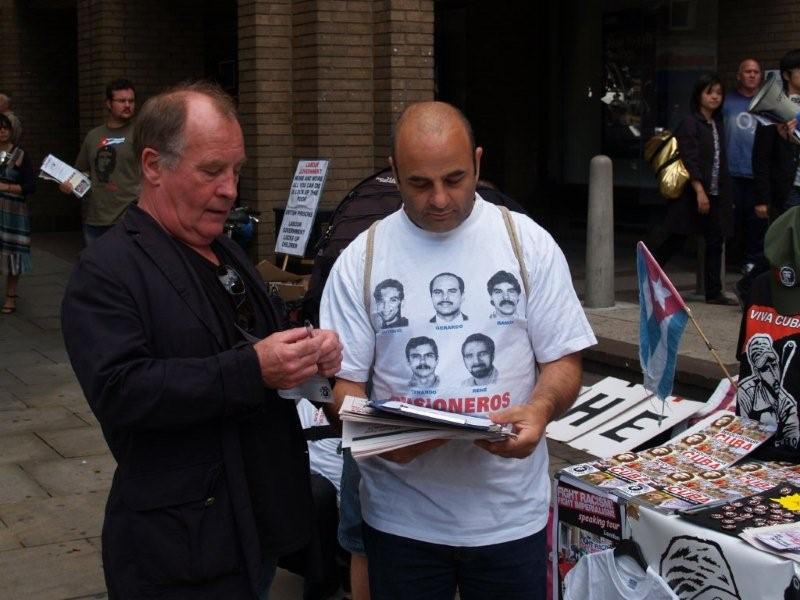 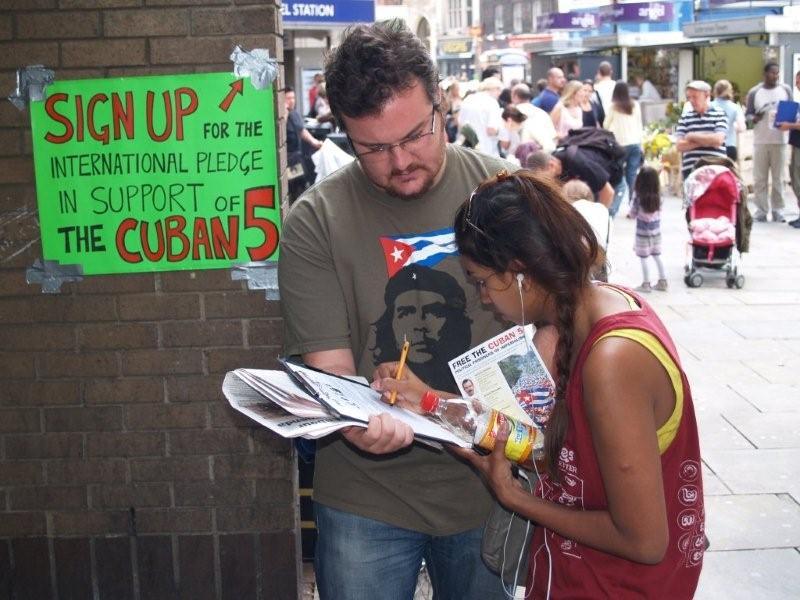 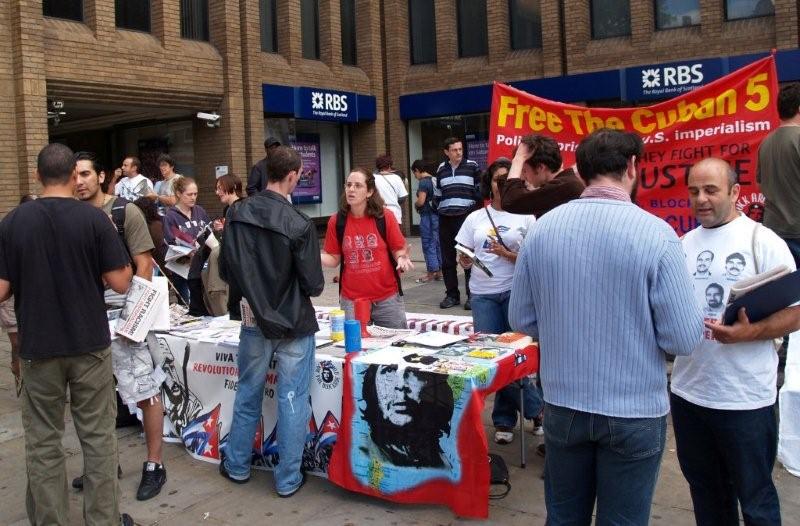 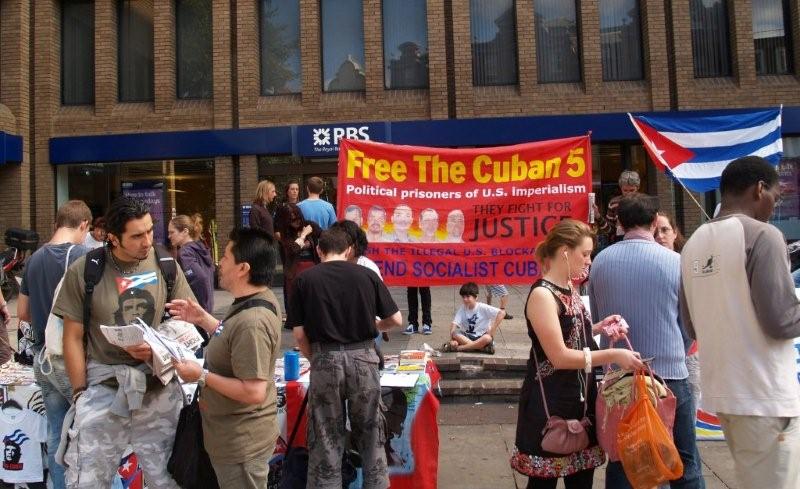 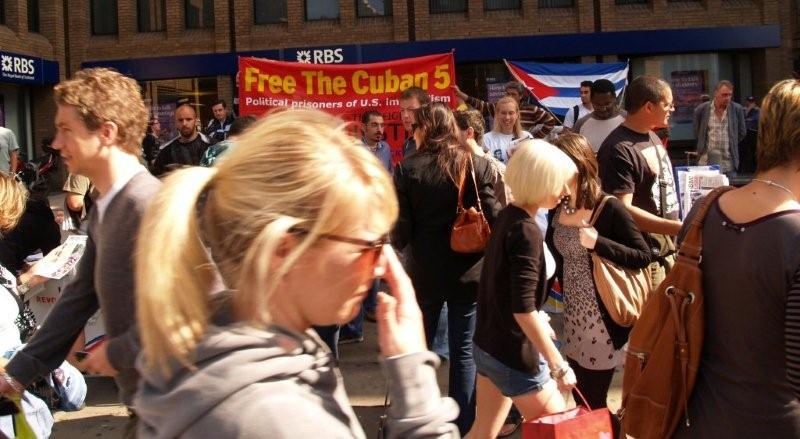