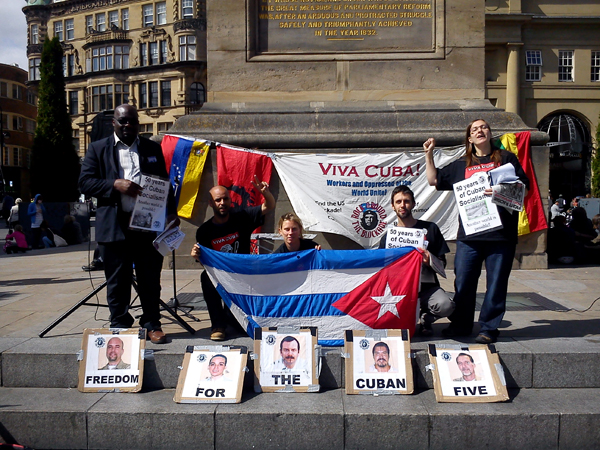 On Saturday 23 July Rock Around the Blockade North East held a lively street celebration for the anniversary of the 26 July attack on the Moncada Barracks in 1953, which marked the beginning of the Cuban Revolution.

Grey’s Monument in the city centre of Newcastle was adorned with Che Guevara banners and Latin American flags. A sound system played Cuban, Venezuelan and British revolutionary music in between rousing speeches documenting the outstanding achievements of the Cuban revolution over the past 50 years.

Activists spoke against the illegal US blockade that has been in place since 1961 and others showed how Cuba is a beacon of hope, an anti-imperialist struggle that is driving movements across Latin America and beyond.

“The people united will never be defeated!” was the rallying call when 2 English Defence League members attempted to sabotage the celebration by holding an English flag on the Monument.

The speakers pointed out how the English defence league were playing the game of the ruling class, defending it’s wars abroad, dividing the working class to make us fight for the scraps from the table and backing the bank bail outs by attacking anti cuts protestors.

'The people united will never be defeated!' has been put into practice in socialist Cuba where for over 50 years the working class has been in power, driving out first the Batista dictatorship, then US imperialism to build a society which meets the needs of the whole population and, with health and education brigades, provides vital support to poor and oppressed people across the globe.

Socialist Cuba provides essential lessons and inspiration for anyone active in Britain today fighting racism and fighting the cuts.