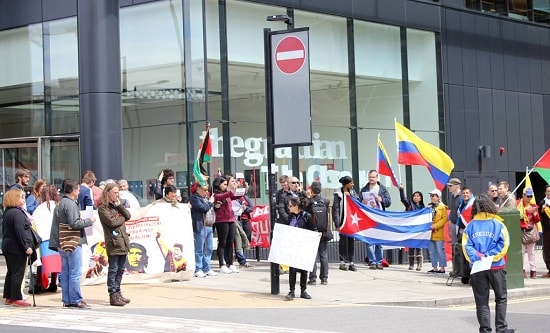 Update, 9 June 2020: In an article titled 'Cuba sets example with successful programme to contain coronavirus' published 7 June, Ed Augustin writing for The Guardian finally acknowledged Cuba's success in fighting Covid-19. Previously, the newspaper had followed a long-held editorial policy of hostility and slander towards socialist Cuba, which rang increasingly hollow as Cuba set an outstanding example in the pandemic. We hope that our statement published on 6 May, below, contributed to the process by which The Guardian has been forced to change its tone.

Once again The Guardian has come out to attack Cuba, focusing on its internationalist response to the Covid-19 pandemic; once again it is the notorious Tom Phillips who has been given space to sow doubt as to the motives underpinning Cuba’s despatch of Henry Reeves brigades across the world to support efforts to limit the impact of the virus (‘Doctor diplomacy’: Cuba seeks to make its mark in Europe amid Covid-19 crisis, 6 May).

It is of course not possible to attack Cuba directly for its response – sending brigades to Italy and Andorra in particular – and Phillips has to quote local newspapers giving the brigades an enthusiastic welcome. But Phillips’s purpose in life is to traduce any progressive movement in Latin America: in the past, Nicaragua and Venezuela, but now he wants to show he can take on the third of former US Secretary State John Bolton’s ‘troika of tyranny’. Never a stickler for accuracy, Phillips quotes uncritically the claims of a former British ambassador to Cuba, Paul Hare, that ‘Fidel Castro launched the “doctor diplomacy” policy soon after his 1959 takeover as a means of using the island’s highly trained professionals to export revolutionary ideas and make new friends.’ Yes, Cuba’s first medical brigade was one sent to Chile in May 1960 after a horrific earthquake – but the overwhelming majority of Cuba’s doctors had fled the country by that time. Not until 1976 had Cuba trained enough doctors to restore the doctor-citizen ratio to its pre-Revolution ratio – but throughout the intervening period had sent medical brigades to Algeria, Congo, Guinea Bissau, Angola and Nicaragua (see Helen Yaffe: We Are Cuba, pp153-154*). Cuba’s socialist internationalism meant that it would always share what little it had.

But what outrages Phillips is that Cuba now has the temerity to send medical brigades to advanced, wealthy European countries. If this means citing in his support the most reactionary people in the world, then so be it. And so Phillips tells us that ‘“The Cuban ‘medical missions’ are exploitation: a for-profit front used to fund the regime’s repression and sow political discord,” the US secretary of state, Mike Pompeo, tweeted last week.’ Phillips passes no comment on this, and by letting the quote stand, implies that Pompeo is speaking a truth. That Phillips cannot bring himself to mention the illegal US blockade of Cuba in this context, let alone its intensification under the Trump administration, is a silence that speaks volumes.

However, if his readers are unconvinced by his uncritical acceptance of Pompeo’s opinions, he can turn to a little-known academic, Stephanie Panichelli-Batalla, who, Phillips says, agrees that ‘there were legitimate concerns about Cuba’s authoritarian system and how those sent overseas were treated. “Yes, of course there are big human rights problems in Cuba – there have been since the start [of the revolution] and there are still problems.”’ Panichelli-Batalla has started doing the rounds as a liberal critic of Cuba: yes, Cuba’s medical internationalism is wonderful, but we must not forget that ‘it allows Cuba to shift scrutiny away from its own poor human rights record.’ (Panichelli-Batalla The Conversation, 26 March 2020). She adds, for good measure, ‘Many doctors have also used the [medical] mission as a way to escape a country that is still governed by an authoritarian regime and between 2006 and 2016, more than 7,000 Cuban doctors defected to the US. Several have even accused the Cuban government of using them as modern slaves.’ She does not pause to mention that such ‘medics had paid no tuition costs, graduated debt-free, and had voluntarily signed contracts to work abroad assisting underserved populations’ (Yaffe, p171-72), or that such medics had to invest in new qualifications to practice in the US. Given that up to 400,000 Cubans have worked abroad in medical missions, 7,000 defections would be about 2%. In other words, 98% could not be bribed and preferred socialism to the dollar.

The British ruling class faces a danger: that ordinary people will contrast Cuba’s socialist and internationalist approach to the Covid-19 crisis with the appalling performance of the British government, and draw the conclusion that socialism is not only a viable option, but essential to rescue humanity from the brutality of capitalism. In this confrontation between two social systems, The Guardian and its journalists together with their pet academics know where they stand: their distortions, selective quotations and innuendo about Cuba are a crucial line of defence for the ruling class. Better a system that preserves their privileged positions than a system which defends humanity as a whole.

*Helen Yaffe: We are Cuba – how a revolutionary people have survived in a post-Soviet world, Yale University Press, available through our website for £15.50 inc p&p