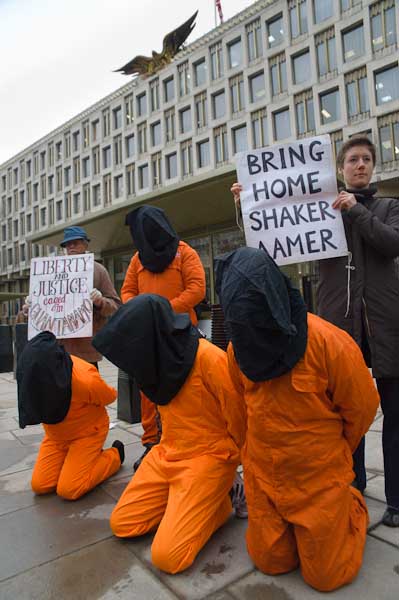 On Monday 11 January 2010 the London Guantánamo Campaign held a demonstration outside the US Embassy in London to mark 8 years of the Guantánamo Bay torture camp. A vigil by protesters in orange jumpsuits and black hoods was followed by an hour of speeches demanding the closure of the camp and justice for all detainees.

Nicki Jameson spoke at the demonstration on behalf of Fight Racism! Fight Imperialism! She pointed out that the US presence at Guantánamo Bay is an illegal occupation of Cuban territory dating back to the 1903 Cuban-American Treaty, which was signed under threat of military action.

Despite Barack Obama’s pledge to close the camp by 22 January 2010, this deadline will not be met. Just under 200 prisoners are still held there. Of these around 50 have been cleared but will not be released until the US can find countries to accept them. There may be sufficient evidence to try around 25 in the US, but much of this evidence was obtained using torture.

It is not clear why the US are still holding the approximately 120 remaining detainees. One of the speakers, journalist Andy Worthington, suggested that in Shaker Aamer's case it may well be that his release would be too embarrassing for the US government because of his extensive knowledge about what has happened at Guantánamo.

There are still 2 men with British connections held at Guantánamo Bay. Shaker Aamer is a British resident, with a British family living in Battersea, London. His 4 British children include a 7-year-old son he has never met. The London Guantanamo Campaign is also demanding the release of Algerian asylum seeker Ahmed Belbacha, who was formerly living in Bournemouth, on humanitarian grounds.

Other speakers were Jean Lambert, Green MEP for London; Chloe Davies of Reprieve, a legal charity which fights for human rights for prisoners; Lindsey German of SWP/Stop the War campaign; Joy Hurcombe of Brighton Against Guantánamo and John Clossick of the Save Shaker Aamer Campaign.