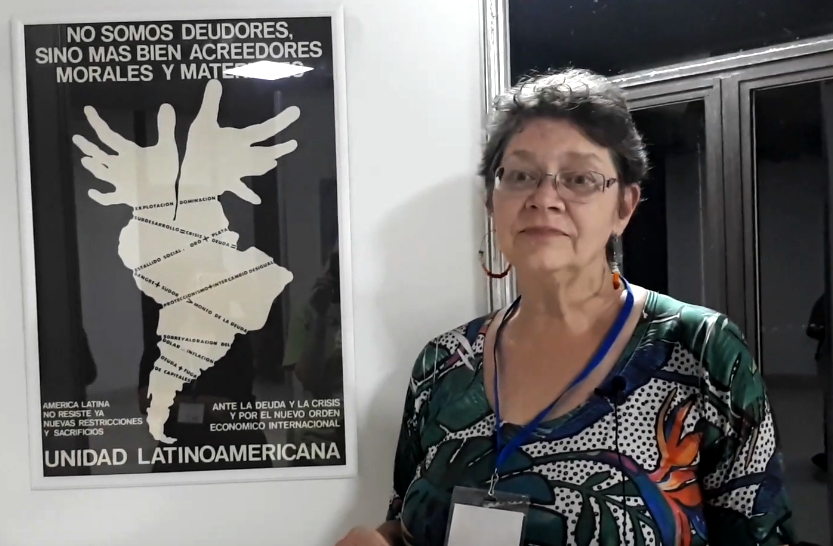 Please could you tell us more about Jubilee South and its demands?

Jubilee South is a movement with networks across Latin America and the Caribbean. We first came together 20 years ago, in 1999, in the midst of the global Jubilee 2000 movement that was looking for debt cancellation for the poorest countries. In Latin America and the Caribbean we became very interested and become part of the movement. However, we said at the time that the problem is not that we can't pay the debt, the basic problem that we face is that we don't owe the debt. As Fidel said, in the 1985 Havana Conference, debt is a problem that impacts all of us- the more we pay the more we owe, there's no end to it.

When you look at what we've actually been loaned, in Latin America, Asia and Africa, we've already paid that debt many times over. But it continues to grow.

So at Jubilee South we say the debt can't be paid, it shouldn't be paid, morally it's unacceptable to pay it because the consequences are misery, poverty, hunger, unemployment, natural and ecological devastation and it changes the entire structures of our countries- the economy, the environment, the people- in order to place the service of our country as being to pay the debt, as opposed to the debt being to service people's interests.

You spoke about the environment, could you tell us a bit more about the role of the mining businesses and agribusinesses in Argentina and how they are contributing?

In Argentina you see the impacts of the debt crisis in a horrendous fashion. Argentina is a country that, since the time of the military dictatorship, has been forced into a situation of structural indebtedness where all of society, both economically and politically, all institutions of governance, are under the control of the debt. Now we have an agreement with the IMF which says what the economic policy of Argentina can be, what the structure of the central bank can do and what it can't do. One of the consequences in Argentina and most of the Latin American and Caribbean countries, is the need, in a sense, to expand extractive industries, whether it's mining, petroleum, agribusiness or fracking, anything that can be sold on the international market and get quick money, dollars, euros, that hard currency that the government needs- it days- to pay the interest on the debt. So in Argentina, for instance, as the debt has continued to accumulate so has the emphasis within the economic policy of an extractivist economy. As a result we have huge mega mining projects, open pit mining, and they are being expanded, they have expanded over the years on an astronomical scale. The same is happening in Brazil and Ecuador and Central America. The government's say the same thing: "we need the money that comes from the sales of these resources in order to pay the interest in the debt." So we have a perverse circle. We pay a debt that is illegitimate, a debt that peoples of Latin America and the Caribbean don't owe. We don't owe it, it was never used for our benefit, but rather for the benefit of the military dictatorships and of the elite. Yet it's we who are paying the consequences, and it's also nature, our planet, our Mother Earth. Mother Earth is being raped in order to get resources to pay interest on debt. The debt causes tremendous human, ecological and economic suffering. In turn that creates more social problems, so the government then says they have to take out even more loans.

It's a circle that can be broken. It must be broken.

At Jubilee South we see the way to do it is firstly: don't pay the debt, it's not ours, we don't owe it, we shouldn't be paying. Secondly, the institutions like the World Bank and IMF, the free trade agreements they sign with countries around the world, where all geared towards creating an environment that obliges our countries into paying for illegitimate debt. In order to break the cycle we have to recognise the illegitimacy of the debt. We have to review the debt- looking at the social, economic and ecological damages it has caused. Very importantly we have to see the history of colonialism and imperialism, of slavery, to review the debt. It needs to be investigated and seen in a comprehensive fashion, recognising that if we are going to have peace, the possibility of people living together, of saving our planet, we have to have nations of justice, of equality among people and with the earth, in order to move beyond this and create social and economic structures that promote people's rights and people's needs and the rights and needs of nature.

A lot of people seem hopeful about the new Argentinian President. Do you think he will promote the needs of the people and planet more?

The new government has a tremendous challenge before it because the economy is in very bad shape, people's lives are in very bad shape, because of the destruction that has taken place over the years. And that destruction is very much related to the fact that today over 20% of the federal state budget is used just to pay interest on the debt. In order for that to happen the budget for healthcare, education, pensions are slashed, there's greater unemployment, environmental protection programmes are slashed, there's huge austerity. All in order to ensure there's money to pay interest on the debt to the IMF.

30% of the population of Argentina today are living in poverty, hunger is a massive even though we produce food for the entire world, the only logic that exists there is the logic of exploitation.

The logic of exploitation is imposed on us by the debt, by the IMF, by the extractivist economy. We have to break that logic and the new government will have a very tough time gathering the political will and conviction that it needs in order to move society forward. The government has got to say that they are going to do what people need, not what the banks are demanding, that's a huge challenge.

In the election campaign the new government were repeating what we've heard for hears- that we need more open pit mining, more fracking, more soya beans to export and get foreign currency so we can pay the interest on the debt. They're saying we need to negotiate with the IMF, maybe pay a bit less, maybe take a bit longer to pay it.

In Jubilee South we are saying you have to break that logic. We know where it goes and it goes nowhere. Nowhere that defends people's rights, that defends nature's rights. It's a logic that goes simply to putting money in the hands and pockets of the big banks and investors of financial capital.